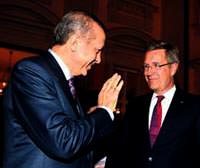 Prime Minister Tayyip Erdoğan arrived in Berlin on Tuesday to join 50th anniversary commemorations of the labour pact which brought hundreds of thousands of Turks to then-West Germany to power its post-war industrial boom.

The Turkish-German deal, signed on Oct. 30 1961, was particularly significant to West Berlin, which just two months earlier found itself encircled by a wall built by East Germany's Communist authorities to prevent its citizens from slipping to freedom through the western half.
Chancellor Angela Merkel and Erdoğan on Wednesday met some of the first "guest workers" who made the long trip north to Germany, and who, contrary to expectations, stayed on in the country. Today, the community numbers some 3 million, about a third of who have German citizenship.
The commemoration comes after a wealth of smaller scale festivals and events which have seen Germany say an unprecedented "thank you" to its migrant labourers and have brought home the realities of the hardship many suffered.
"German citizens with Turkish roots play a crucial role in forging strong and friendly ties between the two countries," Erdoğan said before departing for Berlin from Ankara airport.
The Turks who arrived as guest workers and their families now play a key role in all areas of German life, he added.
One of those who came to Berlin from a suburb of Istanbul was Ferit Guclu. He travelled overland to Munich, then flew on to West Berlin in 1962.
"I had no idea beforehand that Berlin was divided. I was so shocked at how damaged the buildings were after World War Two, everything was so broken. There was also all the barbed wire between East and West," said Guclu, 75.
The first barricades, which went up in secret overnight, suddenly deprived West Berlin of thousands of workers who had commuted from the East, creating an urgent need for labour. Berlin had 284 Turkish inhabitants in 1961. Today it has 176,000 people with Turkish roots.
"The Turkish community is the biggest migrant group in Germany... for the young Federal Republic they were very different in their culture and religion and that is why they didn't assimilate in the same way as guest workers from Spain or Portugal for example," said Dirk Halm, of the Centre for Turkish studies and Integration Research in Essen.
Erdoğan has in the past sparked controversy with his messages to the Turkish community in Germany. On a visit in February Erdoğan addressed 10,000 members of the Turkish community in Duesseldorf and blasted what he saw as persistent European xenophobia.
Turks in Germany should integrate but not assimilate to the point where they abandon their native culture, he said.
Turkish and German officials are also expected to discuss Turkey's stalled bid to join the European Union, with the impasse having intensified after a spat over gas drilling rights around Cyprus.
Brussels said in a report last month Ankara made no progress in the last year towards fulfilling EU membership criteria. Ankara says that it faces unfair treatment and the French and German governments are fundamentally opposed to its membership.