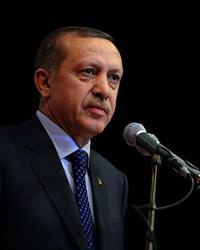 "Turkey wishes that Germany would be its biggest supporter in its EU membership bid," Erdoğan said. "We want a very different kind of support... We have a special relationship."

He was speaking at a ceremony attended by Merkel to mark the 50th anniversary of the signing of the Turkish/German labour pact which paved the way for up to 1 million Turks to come to then-West Germany to fill labour shortages.

Merkel, a Christian Democrat, favours a "privileged partnership" for Turkey with Brussels rather than full membership. But her predecessor as chancellor, Gerhard Schroeder of the Social Democrats, strongly supported Turkey's bid. Personal relations between Merkel and Erdoğan are strained, not least because of Merkel's long-standing opposition to Turkish EU membership.

Erdoğan praised the successes of the first migrants and their families and said the presence of such a large Turkish community in Germany obliged Berlin to show more solidarity with Turkey. The Turkish community in Germany numbers some 3 million, about a third of whom have German citizenship. Erdoğan said Turkey supported integration and he urged Turks to learn to speak German as well as possible. He urged Germany to allow dual citizenship, saying Turkey saw this as a key way of bonding nations. Merkel said Germany had become a more plural and therefore richer society, and speaking fluent German was the key to successful integration. "I am also your Chancellor and we are also your government," Merkel said.

German daily newspaper Bild published an interview with Erdoğan on Wednesday in which he said Germany had led Turkey down in failing to support its EU bid, and had not done enough to acknowledge Turks' integration. Addressing huge audiences of Turks living in Germany, he also attacked new immigration regulations and stood by comments that Turks in Germany should learn Turkish first.