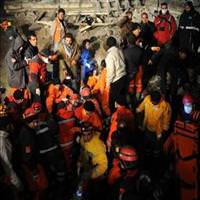 Rescuers found ten bodies, including a child's, on Friday as they dug through rubble after the latest earthquake to hit Van, a city in eastern Turkey already suffering from an earlier 7.2 quake just a few weeks prior.

The toll from Wednesday's 5.7 magnitude tremor rose to 22, with search and rescue operations continuing at the two city centre hotels that were the only occupied buildings to come down. Most people had abandoned their homes after the earlier quake nearly three weeks ago.
Aftershocks have jolted the area with frightening regularity since last month's 7.2 magnitude quake, though experts say Wednesday's tremor represented a new seismic event rather than an aftershock according to Deputy Prime Minister Beşir Atalay, who is overseeing the relief effort.
FADING HOPES
A 5.7 magnitude tremor would not normally inflict much damage, but buildings in the city were weakened by the earlier quake, and some 22 collapsed. Prime Minister Tayyip Erdoğan said an investigation would be launched into how the hotels which collapsed had been ruled safe before the latest quake. "Of course we will start a legal process here. Whoever gave the (report) that they were habitable, whether from the university community, whether from AFAD, we will start a legal process regarding them," he said in a speech.
"My son is in there," one middle-aged man wrapped in a blanket said as he was led away, distraught that his 19-year-old boy was missing below the heap of broken concrete that was once the Hotel Bayram. Other men and women sat on a mattress in the road, crying in despair, as rescue teams worked painstakingly to clear debris in hope of finding more survivors, having already pulled 28 from the ruins. The teams worked to clear the rubble using cutting equipment, pick axes and heavy lifting equipment, occasionally stopping to use sensitive listening equipment in a bid to hear any sound of life beneath the rubble. "We will keep searching until all the rubble has been removed," said a rescue worker from the paramilitary gendarmerie, as he sipped a cup of tea as a colleague took his place shifting the debris. The quake cut power in the city, but the rescue work continued through the night under floodlights powered by mobile generators. The centre of a city appeared like a ghost town with all the buildings abandoned.
As morning broke some men huddled in one-storey tea houses or kebab shops, the very few places that have reopened. One or two groups of men lit fires on the street, burning rubbish to keep warm. Tent cities have been set up on the outskirts of town, but many families have pitched tents close to their homes, though the authorities want to bring them into the organised camps, where aid and sanitation is better regulated.