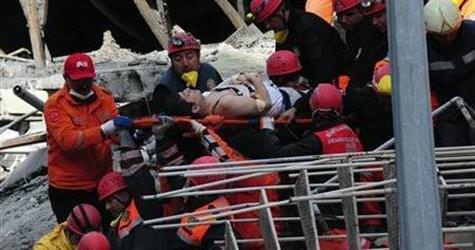 Tens of thousands of people have been left homeless by the quakes in Van province, bordering Iran, and their plight has been worsened by freezing temperatures after the first heavy snowfall of winter.

Prime Minister Tayyip Erdogan visited the quake zone on Saturday amid rising anger among homeless families over relief efforts. Few people are willing to stay in homes scarred by cracks in walls and ceilings while aftershocks shake the area.

Mechanical diggers on Sunday were clearing away rubble from a demolished hotel, television pictures showed. The death toll had stood at 33 on Saturday afternoon.

Under an aid campaign launched by Erdogan, a total of 132 million lira ($74 million) has been raised, including $50 million sent by Saudi Arabia, AFAD said on its website.

It said 30 people had been rescued alive from the rubble since the 5.7 magnitude quake on November 9. Out of 25 buildings that collapsed, only two were occupied -- both hotels -- as most people had left their homes after a far bigger quake on October 23.

A total of 222 people were rescued after the first earthquake, AFAD said. It said some 70,000 tents and 330,000 blankets have been sent to the region.

Funerals were being held on Sunday for two journalists from Dogan news agency who had been staying at the Bayram Hotel to cover the aftermath of the 7.2 magnitude quake that struck Van.

On Saturday, Erdogan promised permanent housing would be provided for the majority of those needing new homes by August next year, before pleading with people to enter tent camps established to see them through the winter.

Police had fired tear gas to break up a protest in Van on Thursday by some 200 men angered by the way tents had been distributed and calling for the local governor's resignation.

Authorities have established tent cities, where sanitation and relief are more easily provided, but many families complain they have no tents and are left fending for themselves.