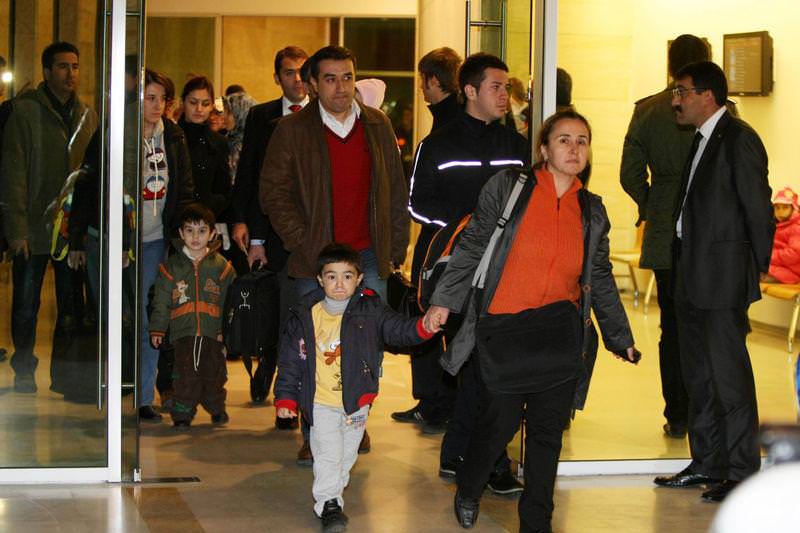 Turkey condemned on Sunday attacks on its missions in Syria and in a diplomatic note called for a guarantee its diplomats in the country would be protected, the Turkish Foreign Ministry said. It said in a statement it had begun to evacuate the families of Turkish diplomats in Syria and called on Damascus to find and prosecute those behind the attacks on Saturday evening.

Turkey will evacuate the families of its diplomats in Syria after protesters attacked its missions there in the wake of the Arab League's decision to suspend Damascus. A crowd of about 1,000 attacked the Turkish embassy in Damascus on Saturday evening, as news spread that the Arab League had taken action against Syria for failing to halt its armed crackdown on eight months of pro-democracy demonstrations.

The attackers threw stones and bottles before Syrian police intervened to break up the protest. Attacks were also staged against Turkey's consulate in Aleppo and its honorary consulate in Latakia. Turkish foreign ministry officials were not immediately available to comment. After cultivating ties with Assad and Syria for several years, Turkey has this year robustly condemned the repression of peaceful protests, fearing Syrian violence could spill over the border if it develops a stronger ethnic or sectarian dimension. Syrian opposition figures have met in Istanbul to forge a united front, the Syrian National Council. Turkey has also given sanctuary to Syrian military officers who have defected. Turkey is not a member of the Arab League.

Turkish news stations reported that the families of staff at the embassy in Damascus would return to Turkey on Sunday. On Saturday evening, residents in Syria said crowds armed with sticks and knives attacked the Saudi Arabian embassy in Damascus and the French and Turkish consulates in Latakia. They said hundreds of men shouting slogans in support of President Bashar al-Assad beat a guard and broke into the Saudi embassy in Abu Rummaneh, three blocks away from Assad's offices in one of the most heavily policed areas of the capital. Outside the Turkish embassy, protesters chanted anti-Turkey slogans, tried to climb the walls and force the gates open.
Syrian police intervened using teargas to break up the protest as the demonstrators threw stones and bottles. In Aleppo, demonstrators entered the consulate garden and tried to lower the Turkish flag but were prevented from doing so by consulate officials. A group of about 5,000 gathered outside the Turkish honorary consulate in Latakia, 330 km (210 miles) north of Damascus on the Mediterranean coast, and broke windows. Officials said a Turkish flag was burned at that protest. No officials at the Turkish diplomatic missions were injured in the protests.