'Know the value of democracy’ 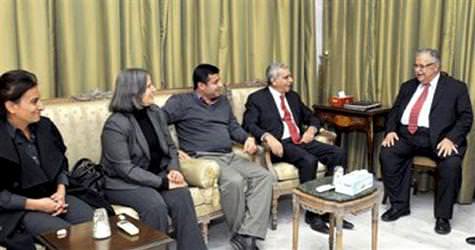 Iraqi President Jalal Talabani offered words of wisdom to a committee of BDP members which paid him a visit. “Know the value of Turkey’s democratic development. The world is changing, we have changed. You also need to change. There is no reason to run after dreams that will never fruition.”

Chairman of the Democratic Society Congress (DTK) Ahmet Türk, Aysel Tuğluk, BDP Chairman Selahattin Demirtaş and Co-Chairman Gültan Kışanak met with President of Iraq Jalal Talabani on November 9th. The committee later went on to meet with representatives from Kurdish parties in Syria. During the meeting with Talabani, issues such as recent developments in the Middle East, the Kurdish situation, operations staged against the PKK and recent arrests of KCK members were all high on the agenda. The committee requested incentive from Talabani, coming after their meeting with the Regional Kurdish Administration leader in Northern Iraq Massoud Barzani. An emphasis was placed on Kurdish unity during the meeting, and the message delivered that the Kurdish administration should not provide access for military operations.
'THE WORLD IS CHANGING'
Emphasizing that weapons and violence are not a solution, Talabani went on to state the following: "The path to a solution is through peace. We have made numerous calls to the PKK to 'Drop the weapons and engage in politics.' Meanwhile, we have also put forth our stance on military operations. We have openly stated that the Peshmerga will not be a part of this. We are currently passing through a very sensitive period. In order to overcome this period, you also need to take on the responsibilities that befall you. We need to be aware that the era of armed fighting is over. Significant democratic steps are being taken. You need to know the value of the democratic development in Turkey. The world is changing, we have changed. You also need to change. You also need stage a political and cultural struggle. The new constitution process offers a historical opportunity. The BDP needs to use this opportunity well."

'LET GO OF THE DREAM'
When DTK Chair Türk expressed that in order for the PKK to announce a ceasefire, the obstacles posed towards reaching a solution to the Kurdish issue must be surpassed, Talabani stated that a ceasefire was "inevitable". "Establishing a Kurdish state is a dream. There is no point in pursuing dreams that will never fruition. Staging a struggle in the parliament is very important. We have advised the PKK to relinquish their arms and to conduct politics." Talabani went on to comment, "However, they did not heed our advice." Meanwhile, Iraqi Prime Minister Berham Salih is also slated to arrive to Turkey soon.