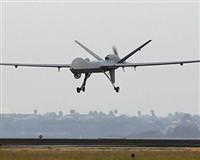 A US Predator drone operation that gathers intelligence to help Turkey in its struggle with terrorists in northern Iraq has shifted its base to southern Turkey from Iraq, a Pentagon spokesman said on Monday.

The mission, which involves four U.S. Predator unmanned aircraft, was moved to Incirlik air base at Turkey's request since all U.S. forces are being withdrawn from Iraq by the end of the year, Captain John Kirby said.

The drones have been flying reconnaissance missions against the PKK from Incirlik for a couple of weeks, he said.

But Kirby declined to discuss where the aircraft was conducting surveillance and whether the drones were still flying across the frontier into northern Iraq.

The shift will help provide intelligence support to the Turkish military "to deal with the specific threat posed by the PKK there on their southern border," Kirby said.

The PKK is listed as a terrorist organization by Turkey, the United States and the European Union. It has fought for more than 27 years in a conflict that has killed 40,000 people.

Kirby said the United States had a longstanding operation using Predators to help Turkey develop intelligence about the PKK's activities in northern Iraq.

"They had previously been flown out of Iraq, and as you know we're coming out of Iraq. So this was an arrangement to deal with that," Kirby said.

Kirby said the mission and the type of support provided to Turkey remained the same; only the basing location had changed.

The United States has some 1,500 military personnel based at Incirlik.