A feast of fraternity 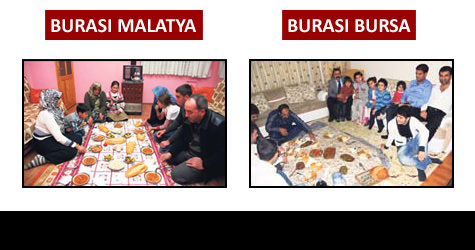 The harsh winter conditions that have hit Van following the devastating earthquake have made the city unlivable. In addition to the state, the public has also opened up their homes, offered to share their meals and have given their hearts to their suffering siblings from Van. One charitable individual has taken 40 earthquake victims under his roof; he refers to them as ‘our blood and our hearts’.

Turkey has embraced the tens of thousands earthquake victims that have escaped Van. An internet campaign, entitled 'Our home is yours' (Evim evindir) has allowed for 1,515 earthquake victims to be taken in as guests. Turkey has unified in solidarity to help the victims of the earthquake in Van which killed 644. Aid made its way to the region eve faster than search and rescue teams at times. Adults donated their salaries and sent blankets, while children gave their allowance money and toys to the earthquake victims in Van. However, when the region continued to rock like a cradle, a mass exodus began. Citizens opened up their homes, while governorships, municipalities, private administrations and non government organizations reached out to help those that had no one they could take shelter with.
The Prime Ministry Natural Disaster and Emergency Situation Administration (AFAD) have mobilized in order to establish a more structured system of relocating people. In governorships throughout the country, 81 bureaus were set up in order to accommodate the earthquake victims in empty residences in their regions. Citizens who want to offer their empty residences are able to apply to these offices.
"MAY GOD BLESS THEM"
Tahsin Doğan, a shop owner from Malatya, decided to go to Van with his wife Fadime Doğan after witnessing what was transpiring there on TV. When he realized that the situation was even worse than portrayed, he decided he would be able to host at least one family in his home. He was directed by the crisis table set up there to the Berkli family and when he witnessed the makeshift nylon tent the six-member family was staying in, he immediately brought them to Malatya and let them live in the bottom floor of his home. He also sent the family's four children to school. Describing the event as 'a miracle', Meliha Berkli states, "My husband and I grabbed our kids and ran from the house we were renting. We set up a nylon tent in the garden; however we thought we were going to die from the cold. My husband and I never slept out of fear that something would happen to the children. Mr. Hasan invited us to Malatya and I cried from joy because my children were no longer going to freeze to death. May God never let anyone else suffer like this. Our lives have changed here. What we have experienced is like a miracle." The man who offered the family shelter, Tahsin Doğan stated, "Anything can happen in this country, however what is important is sticking together. I am helping as much as I can. My wife and my children are always with the family and we all go on picnics together."
İsa Tacar, the South Marmara District Manager of a bus firm that transports passengers to Van, opened the door of his three bedroom home in Bursa to accommodate earthquake victims from Van. He took in eight people after the first earthquake and then 22 other acquaintances after the second. With eight children of his own, Tacar's home is now filled to the brim. Tacar designated two rooms to the females and the living room and the remaining room for the males and children. With a population of 40 in his household, inevitably the food bill also increased. Ordinarily the family purchases four loaves of bread a day, however now they are buying 30. In order to fill his guests' stomachs on their first day, Tacar purchased eight kilos of chicken. With everyone unable to fit at the table, they began to take turns eating in shifts in the living room. Tacar asked for beds from his neighbors and purchased 25 new blankets. When asked about the number of guests he is hosting, Tacar replies, "At present 40". Tacar states, "They are our blood and hearts. Their homes were destroyed. They were left on the streets and it is snowing there. And I am sharing my warm home with them. I will host them for as long as I can. Our only trouble is having enough places to sleep and the lines that build up for the restroom. We will figure it out."
BATMAN BUSINESSMAN HANDS OVER HIS VILLA
Burhan İzgi, a businessman from Batman, has opened up his luxurious villa to the Karaca family, whose home in Van's Topağtaş village was destroyed. He has also been taking care of all of the family's needs. İzgi explains, "If I have lightened their load of suffering even just slightly that would make me very happy. I am expecting other wealthy people to also take care of our brothers." Having been given a warm place to stay with his family Alaattin Karaca (56) states, "for those who embraced us and for everyone who ran to help after the earthquake, may God bless you."
The Umut Dernek in Yozgat has offered help to the 14 member Macit and Sarıgül families that were confined to stay in tents following the quake. Yeter Macit, a university student in Yozgat, left immediately after the earthquake to be with his family. However, the situation was terrifying. Their own home and those of their close ones had all been heavily damaged. Upon hearing Macit's situation, his friends contacted the Umut Dernek (Hope Foundation). A home was rented for the families and was fitted out with furniture and necessities. Once they received the good news of their fortune, Macit and 14 of his relatives were invited to Yozgat. When they arrived to the flat, which had heating, everyone burst into tears. The children of school age were immediately signed up, and the older members of the family were given jobs.

ALİ ŞEN'S SUMMER HOUSE...
Businessman and former Fenerbahçe chairman Ali Şen has opened the doors to his 1.5 million lira villa located in Silivri, Istanbul. Ali Şen's daughter, Suzan Şen contacted the Istanbul Governorship and received the name of a 12-member family. The summer house was prepared for the family of ten children, eight of which are boys.
A former Van resident, Cemal Tanyıldız (73) who relocated to the Sazlık village in Osmaniye's Toprakkale district, offered up his three-story home to his fellow townsmen. Opening his doors to five families, with a total 35 members, Tanyıldız states, "I couldn't leave my fellow townsmen on the street after they suffered from the earthquake."
Meanwhile approximately 2,000 earthquake victims were relocated to the guest rooms of a number of public foundations and establishments as well as in camps. A number of citizens volunteered to open up their homes to the earthquake victims. Registration has begun for earthquake victim children to return to school. A number of families were also set up at the guest house of the Ministry of Transportation's Konyaaltı Beach. The children are able to forget their woes as they play along the beach in Antalya.

ORPHANED CHILDREN NO LONGER ALONE
After the second devastating earthquake in Van, 83 children and 20 babies who were staying at the Van District Social Services Department's Sevgi Evler, were invited by the Beyoğlu Municipality to stay at the Kefken Environment Summer Camp in Kocaeli.