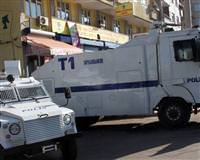 Police detained 51 suspects, 47 of which were attorneys in dawn raids in 16 provinces across Turkey, including Bursa, Istanbul and Denizli as part of an ongoing investigation held by the Istanbul Public Prosecutor.

This was the third wave of an investigation in which 147 suspects have already been apprehended on charges of ties to the KCK, which is a higher-level organization of the PKK terrorist group. Amongst those already standing trial are Prof. Emine Büşra Ersanlı and broadcaster Ragıp Zarakolu