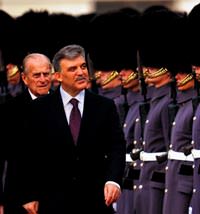 President Abdullah Gül said neighboring Syria had reached a dead end and change there was inevitable, during an interview with Britain’s Guardian newspaper.

"But we don't believe the right way to create change is through external intervention. The people must make that change," he said. "Civil war is not something that anyone would want to see happen. Everything must be done to prevent it. It is very dangerous."
Britain has condemned Assad's actions as "appalling and unacceptable" and held talks on Monday with representatives of Syrian opposition groups.
Gül told the Guardian, in the interview published on Tuesday, he had spoken to Assad regularly until a few months ago and advised him to allow free elections, release political prisoners and announce a clear timetable for reforms.
"It's quite too late for that sort of thing now," he told the newspaper. "He seems to have opted for a different route. And frankly we do not have any more trust in him."