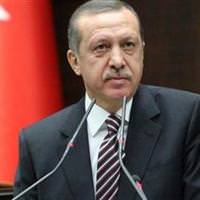 In Turkey's strongest condemnation of its one-time ally Syria, Turkish Prime Minister Tayyip Erdogan called on Tuesday for Syria's president to step down and likened Damascus's crackdown on protesters to the tactics of Nazi Germany.

"Without spilling any more blood, without causing any more injustice, for the sake of peace for the people, the country and the region, finally step down," Erdoğan said in comments aimed directly at Syrian President Bashar al-Assad.
In a speech to his ruling AK Party, Erdoğan said Assad should learn a lesson from the fate of Muammar Gaddafi -- the Libyan leader toppled by rebels in August and killed after his capture last month. Erdoğan said his criticism did not mean Turkey was calling for any international military action to stop the violence in Syria, echoing earlier comments from Turkey's president.
In a further signal Turkey was stepping up pressure on Syria, Turkish media reported that Turkey's land forces commander had travelled to a city near the Syrian border to inspect Turkish frontier troops. Turkish leaders have sharpened their criticism of Assad and his crackdown on an 8-month-old uprising, saying it was impossible for him to stay in power but Tuesday's comments were the first time Turkey has made a direct public call for the Syrian leader to quit.
"Fighting your own people until the death is not heroism, it's cowardice. If you want to see someone who fights his people to the death, look at Nazi Germany, look at Hitler, look at Mussolini," he said. "If you cannot learn a lesson from them, look at the killed Libyan leader who turned his guns on his own people and only 32 days ago used the same expressions as you."
For years Turkey built up political and commercial ties with Syria, signalling a "common future" together after the two almost went to war in the late 1990s. Turkey is now Syria's largest trading partner with bilateral trade in 2010 worth $2.5 billion, both countries waived visa requirements for their citizens in 2009 and Erdoğan even held cabinet meetings with Assad at one time. The split came as Assad repeatedly ignored calls from Turkey and the international community to end his repression of anti-government protests. "We do not have eyes on any country's land, we have no desire to interfere in any country's internal affairs. But when a people is persecuted, especially a people that are our relatives, our brothers, and with whom we share a 910 km border, we absolutely cannot pretend nothing is happening and turn our backs," Erdoğan said. Often cited as a model for democracy in a Muslim country, Turkey has spoken of the need for greater democracy in the Middle East as Arab uprisings rocked the region.
NO OUTSIDE MILITARY INTERVENTION
Turkish leaders have taken aim at the Syrian leader almost every day since Turkish diplomatic missions inside Syria were assaulted by pro-Assad crowds earlier this month. Erdoğan called on Assad again to find the perpetrators of those raids and an attack on a bus carrying Turkish pilgrims in Syria on Monday. While the United States and the European Union gradually imposed sanctions against Damascus, Turkey has been slow to follow but says it is readying its own sanctions against Assad's government in addition to an arms embargo already in place.
In an interview with Britain's Guardian newspaper on Tuesday, Turkish President Abdullah Gül said Syria was now at a "dead end" and that change was "inevitable" but said that change should not come about through external intervention. Erdoğan echoed those comments, saying Turkey's criticism of Assad was not a call for outside interference. "Criticizing a dictator who persecutes and turns his weapons on his own people is not interfering in internal affairs, it is not a call to the world for a military intervention," he said. "We want nothing more than peace and welfare for a people who are our brothers."
While Turkey is opposed to outside intervention, it has met with Syrian opposition groups and allows them to meet in Turkish cities. It has also given refuge to Syrian army defectors but denies it is supporting an armed resistance. There are currently more than 7,000 Syrian refugees living in camps inside Turkey. Ankara has bad memories of the 1991 Gulf War, when some 500,000 Iraqi refugees fled to Turkey to escape Saddam Hussein's forces.