Syria reaches point of 'no return' 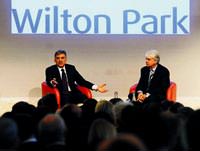 President Abdullah Gül warned on Wednesday of a Sunni-Shi'ite divide that he said could pitch the Muslim world back into the "darkness of the middle ages".

Gül said in a speech to a British foreign policy thinktank that Syrian president Bashar al-Assad's crackdown on opposition could "drag the whole region into turmoil and bloodshed".
Turkey has been increasingly outspoken about Syria's handling of months of protests, with Prime Minister Tayyip Erdoğan calling on Tuesday for Syria's president to resign and likening Damascus's crackdown to the tactics of Nazi Germany.
"Violence breeds violence. Now, unfortunately, Syria has come to a point of no return," he said.
The fate of Syria was important for the entire region, since the country sat on sectarian fault lines, Gül said.
"Defining this democratic struggle along sectarian, religious and ethnic lines would drag the whole region into turmoil and bloodshed."
On the broader Arab Spring, Gül, who is on a state visit to Britain, voiced concern about attempts "by certain circles" to foment sectarian, ethnic or ideological strife across the region in order to hijack the process.
SUNNI-SHI'ITE DIVIDE
"I observe a simmering threat in the region based on a Sunni-Shi'ite divide. This dangerous process which will waste the energy and the resources of the region must be prevented," he said.
He called on governments "not to fall into the trap of such a primitive divide in the Muslim world."
"It poses the greatest threat to the prospects of the Arab Spring and has the potential to move the Muslim world from the 21st century into the darkness of the Middle Ages," he said.
There was also a risk of the remnants of old regimes trying to cling to power and slowly kill the spirit of revolution, he said.
He did not name any countries but, in Egypt, protesters have returned to the streets, frustrated at the army's apparent reluctance to relinquish its power after the fall of former President Hosni Mubarak.
Warning that a failure to restore the economic order in the region could lead to chaos, he said he had been urging the global financial institutions -- the World Bank and the International Monetary Fund -- and major developed countries to launch a comprehensive economic restoration program to support political transition in the Middle East.