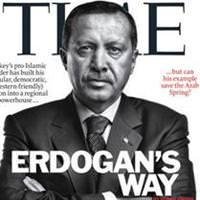 In a poll of ‘Who Should Be TIME's Person of the Year 2011?’ conducted by Time Magazine, Prime Minister Recep Tayyip Erdoğan may very well place first. Over the past two to three days, Erdoğan’s votes have reached 61,404 placing him in first place ahead of the likes of popular footballer Leo Messi.

Every year, Time magazine asks for readers' input on who influenced the news most, for better or worse and should therefore be selected as the magazine's choice for the Person of the Year title. In the ongoing online voting for the most popular figure, over the past few days, Prime Minister Erdoğan has seen a significant rise in votes.
Barcelona's popular footballer Lionel Messi had secured a long-standing top spot until Prime Minister Erdoğan left him in his wake. By the time we went into press, Erdoğan had 61,404 votes, while Lionel Messi followed in second with 61,270 votes.

Meanwhile, with 77,504 votes, Erdoğan also tops the list for least popular, beating out the 1% group, famed for being the one percent to gain the most from the economic crisis, which has 28,137 votes.