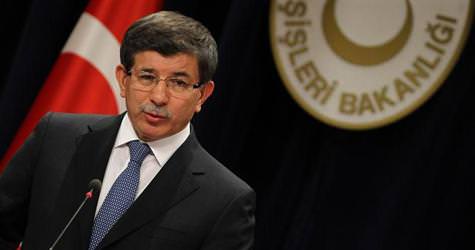 Syria's biggest trade partner Turkey suspended all financial credit dealings with it on Wednesday and froze its government's assets, joining the Arab League in isolating President Bashar Assad over his military crackdown on opponents.

Announcing the new Turkish measures, Foreign Minister Ahmet Davutoğlu told a news conference Turkey would block delivery of all weapons and military supplies to Syria. Relations with Syria's central bank were suspended and a cooperation agreement was halted until there was a new government in place. "Until a legitimate government which is at peace with its people is in charge in Syria, the mechanism of the High Level of Strategic Cooperation has been suspended," Davutoğlu said. Assad's government had come "to the end of the road," he said.
Turkey, which last year had $2.5 billion in bilateral trade with Syria, was once one of Assad's closest allies, but Prime Minister Tayyip Erdoğan lost patience with him. Turkey now hosts Syrian army defectors and opposition group. Ankara has said any sanctions would not hurt the Syrian people and has ruled out cutting off electricity and water supplies. It has also said civil aviation by Turkish Airlines to Damascus will continue. Turkey, a NATO member, has a 900 km (560 km) long border with Syria. It said on Tuesday it did not want military intervention in Syria but was ready for any scenario, including considering setting up a buffer zone to contain any influx of refugees
Here are details of the measures announced by Turkey:
* Strategic cooperation between the Turkish and Syrian governments has been suspended until a "legitimate government which is at peace with its people is in charge in Syria".
* Senior officials in Assad's administration and business people who have provided strong support to the government will be banned from travelling to Turkey.
* All sale of weapons and military equipment to Syria's army will be stopped.
* Delivery of weapons and military supplies overland through Turkey or through Turkish waters and airspace via a third country to Syria will be blocked.
* All relations with Syria's central bank to be frozen.
* All bank assets of the Syrian government in Turkey to be frozen.
* All financial credit dealings with Syria to be stopped.
* All transactions with the Commercial Bank of Syria except for existing transactions to be stopped.
* All credit agreements signed with the Eximbank to finance Syrian infrastructure projects to be stopped.