The KCK issues an inhuman ruling on a young girl 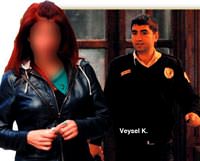 A 23-year-old woman from the Peace and Democracy Party, or BDP, who was raped in Istanbul, wanted to take the case to the public prosecutor. However, the PKK’s urban wing, the KCK, refused her request and formed a so-called ‘court’ to hold the trial themselves. The result was a shocking order for an ‘honor killing’: “The young girl will kill her rapist and then commit suicide.”

The KCK organization and off-shoot of the PKK terrorist organization, which has suffered a significant blow in recent operations, set up their own so-called 'court' to try a man accused by a 23-year old member of the BDP's youth wing of sexual assault.
Sabah's Special Intelligence Department tracked the step by step developments involving this so-called court set up by the KCK in Istanbul. According to the allegations, a man employed as a security for a municipality in Istanbul deceived the 23-year-old women with intentions to marry her and invited her to his workplace. Under the pretense that it was cold out, the man took the young woman to the football stadium dressing room where he proceeded to rape her. The victim told a girlfriend of hers who is on the BDP staff that she planned to file the case with the public prosecutor. Her friend then went and relayed the information to BDP officials.
KCK: WE WILL SOLVE THE ISSUE
Three BDP officials stated that the case could not be held in an "enemy court" and that they would rectify the issue internally. A makeshift court was set up in a place of business located in the center of Istanbul. The young girl pleaded her case, explaining that the event took place two and a half years ago; she stated that her assailant was using drugs and gave her a cigarette that day. She explained that she lost consciousness and when she came to she hit her head against the walls but she said, "It was too late. He had forced himself on me."
After the incident, the assailant told her he would postpone the marriage for two and a half years until she finished school. However, when she finally did graduate, he then told her that his family wouldn't accept her and he would not marry her. When the 'defendant' claimed that the young lady was texting other people a request was made to see her phone records, however because an official request is necessitated to obtain such documents the investigation could not be conducted.
"SEND THEM TO MAHMUR"
A sentence stated at the second hearing of the 'trial', portrays an idea of how the KCK decides to handle such situations. One of the BDP members handling the case proposed that both the young lady and her assailant be sent to the PKK Mahmur camp in Northern Iraq. Claiming that the case could be 'tried' by the so-called 'higher court' there, the decision was not approved by the others at the trial. A doctor's report from the incident which transpired two and a half years ago was requested and in the end the KCK was unable to reach a verdict in the so-called 'trial'.
HONOR KILLING OPTION SURFACES
A relative of the victim told the young lady, "If he refuses to marry you, then we are going to give you a gun. You are going to shoot him in the head first and then shoot yourself to clean up this mess." Now the young girl lives with the fear of death.