PM Erdoğan: No one can limit freedom of expression or democracy in Turkey 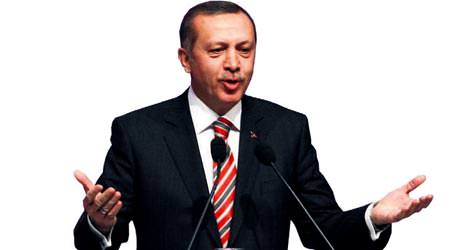 Erdoğan responded to criticism that the press is under pressure by stating, “We are not willing to let what was done to us be done to others. As a Prime Minister who has served jail time for reading a poem, I would not consent to anyone going to prison because of their thoughts or what they have written.”

During an address at a reception held for Zaman Newspaper's 25th anniversary, Prime Minister Recep Tayyip Erdoğan responded to criticism that the state exerts pressure on the press by stating, "As God is my witness, we have absolutely never sought revenge, we never would and we never will. We would not accept for what happened to us to be done to others."

Explaining that they have lifted all obstacles to freedom of expression, Erdoğan stated, "One of our most important goals is to ensure that the suffering experienced in the past is not experienced today nor in the future." Erdoğan went on to state, "I would not, nor could I ever, consent to anyone going to prison for their thoughts, expressions or writings." In regards to the current detainment of certain journalists, Erdoğan stated, "These individuals are being tried for criminal accusations which include possessing weapons and explosives, forging documents, sexual harassment, terrorism and attempting to stage a coup."

During the address, Erdoğan went on to deliver the following messages:

COLLIDING INTO HEADLINES: We have come where we are today through colliding with headlines. We have quite literally battled with headlines. We have gone through periods when headlines were used like arrows and aimed at us. Even to the point of where journalists were made to write certain articles. Later, those clippings were placed in a folder for a case opened to close our party. We were shocked and surprised to see the newspaper articles used against us. "When we asked, 'Are these your documents, is this your evidence?' They said 'yes'. As God is my witness, we have absolutely never sought revenge. We never would and we never will. Because we know this: For freedom is the absolute right of my God-worshipping nation." Prime Minister Erdoğan's reference was to a famous line from the National Anthem.

JOURNALIST CASES WILL BE DROPPED: Yes, there are problems; however we did not create them. We are staging a difficult battle against an outdated, oppressive, totalitarian and intolerant mentality that has been in place for decades and even centuries. Our Minister of Justice has initiated a new era of reform. We have paved the way even further for freedom of expression. As a result, a number of ongoing trials against journalists have been postponed and they may even be dropped.

THE WEST DOES NOT HAVE PRO-COUP JOURNALISTS: To establish the groundwork for innocent people to be massacred through establishing targets, warping news and committing slander can not be considered to be freedom of the press or freedom of expression. Westerners have a difficult time comprehending this. They do not have journalists who broadcast on behalf of a coup.

I WILL NOT ALLOW FOR PRISON TIME FOR FREEDOM OF EXPRESSION: As a Prime Minister who has served jail time for reading a poem, I would not consent to anyone going to prison because of their thoughts or what they have written and I never will. As for execution, we will be conducting our duties rightfully, so no one should feel hopeless and no one should fall into despair.