Davutoğlu: The result of waiting with restraint 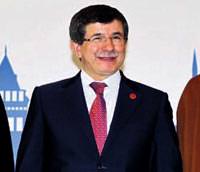 Offering his assessment of the French politicians’ appeal to the Constitutional Council, Foreign Affairs Minister Ahmet Davutoğlu states, "We thank them. We also thank the Turkish public who have remained cool-headed. This is the result of waiting with restraint.”

Turkey's Ambassador to Paris Tahsin Burcuoğlu made an announcement in Paris in which he stated, "We have reached a very important point. The development we awaited has fruitioned. We thank everyone who has offered their support. Turkish-French relations could not have survived with this bill. We are expecting an affirmative response from the Constitutional Council." Burcuoğlu also went on to state, "We were pleased with the numbers, however they could have been even higher."
Last Update: Feb 01, 2012 5:48 pm