Our doors are open for Syrian nationals 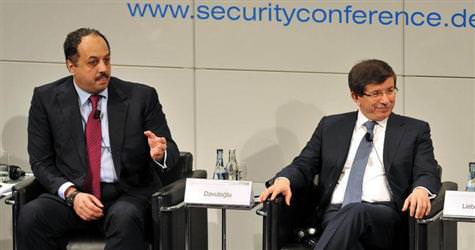 Explaining that they have a moral obligation as neighbors, Davutoğlu states, "We will open the doors to our homes for all Syrians escaping the oppression that want to come here.”

After the Russian and China veto on U.N sanctions, Foreign Affairs Minister Ahmet Davutoğlu issued a series of strong statements from Munich, including "The Cold War in our region must come to an end. Our door is open to any Syrians escaping oppression."

Davutoğlu was speaking at a panel on the Middle East at the 48th Munich Security Conference, when he stated, "Turkey has done all it can for Syria."

Davutoğlu went on to comment that both Prime Minister Erdoğan and himself had continuously warned the Damascus administration, and stated "We were expecting an alternative to be reached at the Security Council yesterday. Unfortunately, due to the Russian and Chinese veto, a decision was not reached. Now it seems we need to discuss when a veto should be used."

Davutoğlu also expressed that as a neighboring country they feel they have a moral obligation and stated, "In seven months, Turkey has received 12,000 Syrian refugees and we don't know how many more will come. I am announcing from here however that if Syrian nationals want to come here, then we will open up the doors to our homes. If they are escaping oppression, they will be safe in Turkey."

Davutoğlu also stated that the international community needs to raise their voice as loud as Turkey has when it comes to Syria. "A strong message needs to be delivered. The Cold War has come to an end in Eastern Europe, however it has continued for 20 more years in our region. This is due to a lack of a solution for the Arab-Israel issue. We want the cold war in the region to come to an end."
Davutoğlu also commented on the plans for Russian Foreign Affairs Minister Baanı Sergey Lavrov and Mihail Fradkov, the head of Russia's Foreign Intelligence Service (SVR) to visit Damascus by stating, "We commend you, however it should have been done much earlier."

When asked a question about Iran, Davutoğlu responded, that without security and political stability there will never be a solution and stated that "military intervention would be a disaster for the region."

Following the Munich Conference, Davutoğlu also released a number of statements to the Turkish press, including emphasizing that the lack of a final decision being reached in the U.N. does not mean that efforts have come to a close. "We will not leave this issue open or on hold. Just how in the past the price for the crisis in Iraq was paid by neighboring nations including Turkey, right now we are paying the price for the crisis in Syria." Meanwhile, following the veto from New York 345 people were killed in Homs, and as a result preparations are being assessed for a possible influx of refugees, especially to the camps set up in Hatay.

Davutoğlu Tells Moderator 'One Minute'
Meanwhile, while speaking at the 48th Munich Security Conference, Ahmet Davutoğlu jokingly responded to the moderator who attempted to warn him of going over time, by stating, "As you know, Turkey has a tradition of saying, 'One Minute.' Davutoğlu was of course referring to the Davos incident in which a democratic crisis transpired between Prime Minister Erdoğan and Israeli President Shimon Peres during a panel, when Erdogan repeatedly requested additional time to deliver a series of statements against Israel.