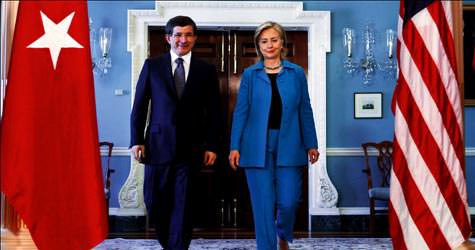 Davutoğlu and Clinton will be discussing the details of establishing a ‘Friends of Syria’ group in order to organize an international conference on Syria and to offer support to the Assad regime’s opposition.

Today, Foreign Affairs Minister Ahmet Davutoğlu will be holding the most important meeting in his U.S. schedule, which has been filled with a series of critical meetings since his arrival last week. Davutoğlu's meeting with his U.S. counterpart Secretary of State Hillary Clinton will primarily deal with the latest developments in Syria, Davutoğlu's intentions to create an 'international conference' and the proposal discussed in the United States to found an international community establishment such as the 'Friends of Syria' group.

During the meeting, Davutoğlu is also expected to bring up an issue he has been insisting upon of late; the need to deliver humanitarian aid to the Syrian civilians closely affected by the ongoing violence. Davutoğlu has already issued a directive for an application to be made to the U.N. Human Rights Commissioner in Geneva on the issue.

An article released in the high-selling U.S. Wall Street Journal recently wrote that "Mrs. Clinton and Mr. Davutoğlu are seeking to establish a 'Friends of Syria' contact group to channel aid to Syrian civilians and to support the democratic opposition." The article also drew attention to Davutoğlu's intentions of seeking ways for Ankara to begin delivering aid to Syrian civilians and voiced concern that the Assad regime may not allow nongovernmental organizations such as the Red Cross and the Red Crescent to enter areas affected by the violence and added that it also "might prove impossible without an outside security force."

The Turkish and American Foreign Affairs Ministers will also be handling the Iran issue during their meeting today. Davutoğlu will express that Turkey is exerting efforts for negotiations to resume on Iran's nuclear program, while the issue of sanctions by the U.S. and the EU are also expected to be an item discussed. Ankara wants Turkish companies to remain exempt from sanctions issued against Iran.

"Our stance against Israel has not changed"

In addition to discussing issues on Afghanistan, NATO, Iraq and the Middle East, an emphasis on repairing Turkey-Israel ties is also expected to surface during today's meeting. Turkey-Israeli relations have been completely put on hold since May 31st, 2010. Ankara demands an apology and compensation for those killed in the Mavi Marmara raid by Israeli forces, the event that has trigged the serious crisis in relations. Turkey wants Israel to abide by their demands, and contrary to allegations which have surfaced in the Israeli media, negotiations between the two countries have not resurfaced. Should Clinton reiterate the discomfort the U.S. feels due to the tension between the two nations, Davutoğlu will respond by delivering the message, "Our stance has not changed; Israel has not kept their promise." Davutoğlu will also refer to Israel's leaking of the report from the U.N. panel and will state, "Israel also did not keep their promise made to the United States."