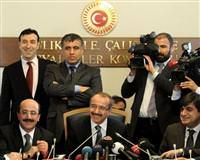 Minister of Education Dinçer explains that the 4+4+4 system of restructuring is an important proposal for Turkish citizens.

Turkey's Grand National Assembly Education Commission is deliberating a bill that would alter certain legislation in place for elementary schools and overall education.
Speaking on the bill on behalf of the government, Minister of National Education Ömer Dinçer explained that during the transition to establishing the eight year mandatory education clause, the combining of elementary and middle schools was extremely problematic. The main issue was derived from students of such varied age groups and different developmental needs being forced to study under the same roof.


Dinçer pointed out the government's aim as being to "provide education for everyone, without gender discrimination, to develop competitiveness and to prepare these students for life," and explains that in most countries, basic education has also been divided into three main divisions, elementary school, middle school and high school. According to the bill, the previous eight year education requirement will be reorganized into a 4+4+4 system, broken down into the three categories of elementary, middle and high school.

"According to the decision reached by the National Education Council, the education law will be restructured to fit a 4+4+4 standard that will require each section of education to be provided in separate buildings. The bill proposal, which takes into account international standards and academic research in regards to mandatory education, aims to eventually and in phases bring the required number of years of education up to twelve."

Dinçer also responded to criticism that the bill which puts an end to continuous education will result in female students not receiving a full education, by stating, "If the government wanted girls to be left at home, then over the past ten years would they have developed dozens of projects directed towards female students?

National Education Minister Dinçer explains that the rigidity of mandatory education breaks down the educational system and therefore providing education in stages is an approach that could solve this problem of rigidity. Dinçer also expressed that without flexibility, it will be impossible to diversify education and as a result respond to the needs of the nation's various segments.