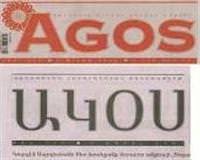 For the first time in 28 years, Turkey's minority newspapers are officially allowed to publish advertisements. News of the decision made by the Press Bulletin Authority (BİK) was greeted with enthusiasm by newspaper representatives. Hearing the news from SABAH, the Greek Apoyevmatini Newspaper Chief Editor Mihail Vasilyadis, says "According to my current budget, I was planning to shut down the newspaper in March. You have brought me great news!"

The General Assembly published the Press Bulletin Authority legislation in the Official Gazette yesterday. All of Turkey's newspapers that fall under minority group status, according to the Lausanne Treaty, will now be able to publish official advertisements.

Mihail Vasilyadis Chief Editor of Apoyevmatini, which has been in circulation since 1925, states, "I am so pleased. According to my calculations yesterday, I was going to be forced to shut down the newspaper in March. You have brought me great news, this is a wonderful development." According to Andrea Rombopulos, the Chief Editor of İho Newspaper, which has been released in Greek since 1977; "This is extremely significant in terms of taking these very old publications seriously. This is a regulation that could bring these publications back to life."

A MANIFESTATION OF SENSITIVITY
The Armenian newspaper Jamanak, published daily since 1908, was the last 'minority' newspaper to release an official advertisement in 1983. According to Chief Editor Ara Koçunyan, "This is a manifestation of sensitivity displayed by our government to provide the Turkish public the opportunity to be shaped with utmost diversity and multi-directionality."
This is a translation of an article originally written by Hasan Ay.