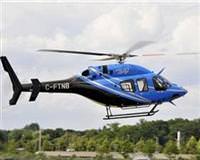 The Department of Police has signed a contract with Bell Helicopter Textron for the purchase of 15 ''Bell 429'' helicopters.

An announcement released on the Police Department Headquarters website reveals that they have signed a contract with Bell Helicopter Textron for the purchase of 15 Bell 429 helicopters for the department's Light Class Double Engine Helicopter Project.

According to the announcement, Bell 429 helicopters not only have night-flight capabilities, but they are also equipped with highly sensitive cameras that allow for exploration, surveillance and determining targets from the air as well as transferring the images obtained to on-land departments.
With capacity for two pilots and six passengers, Bell 429 helicopters are able to fly for four hours straight; they can reach 280 kilometers in speed and can fly up to 695 kilometers distance.
The helicopter project, which aims to increase the Police Department's aviation exploration abilities, will later include the installation of advanced police technology, the supply process of which will be conducted by the Defense Industry Undersecretary.