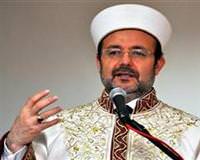 Turkey has cut ties with Syria’s Department of Religious Affairs

Department of Religious Affairs President Mehmet Görmez has officially closed all doors to Syrian Mufti Ahmed Hassun, who has repeatedly invited him to Damascus and claims that the events in Syria are not being reflected accurately. Turkey's Department of Religious Affairs has also cancelled all protocol and collaborations with its Syrian counterpart.

When Turkey cut ties with and established a front against the Syrian administration, the Syrian Mufti stepped in an an effort to repair relations. Hassun, who has already received backlash from Arab nations due to his Pro-Assad stance, extended an invitation to Görmez to come to Damascus. Hassun stated that the events in Syria are being distorted in a game played by Israel and said that he wanted Görmez to see what is happening in Syria for himself. Görmez responded by stating that innocent people are being massacred, which is something that no Muslim can remain silent to. Görmez also expressed that he would not be excepting any invitations by Hassun and that it would also no longer be possible to continue working together. The President of Turkey's Department of Religious Affairs also relayed the message that what is happening in Syria is a source of great pain for all Muslims.

Meanwhile, both nations' Religious Affairs Departments have cancelled all mutual agreements and collaborations. Turkey's Department of Religious Affairs was working with their Syrian counterparts in a number of areas including providing Arabic education for religious scholars, establishing a school in Damascus as well as in conducting a number of joint educational programs. In addition to the halting of all joint programs, a conference geared towards establishing joint solutions to regional religious issues which was going to be held in Gaziantep and Aleppo has also been cancelled.

The Beliefs Platform made a joint press announcement from the IHH Ankara headquarters yesterday regarding two Turkish journalists that have been missing since entering Syria from Hatay on March 7th. The announcement, which was read by MAZLUMDER's Ankara Department Chair Attorney Şerife Gül Arıman, stated that journalist Adem Özköse and cameraman Hamit Coşkun were kidnapped near Idlib and taken to an unknown location. Arıman also said that they have not heard from the journalists in 17 days and that they are concerned for the journalist's lives.