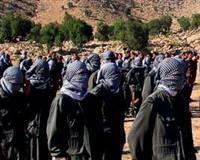 When two out of the nine terrorists killed in Cudi Mountain were revealed to be from Syria’s secret service, Turkey’s police department initiated a widespread investigation uncovering a number PKK members based in Syria. According to the report, there are 222 Syrian nationals led by Sofi Nurettin and acting under the orders of the terrorist organization.

When the identities of two terrorists killed in an operation, which rendered a total of nine terrorists inactive, revealed they were members of Syria's al-Mukhabarat intelligence agency, suddenly the focus was switched on to the number of PKK terrorists residing in Syria.

According to a new intelligence report prepared by the Police Department, there are currently 222 Syrians that are active members of the PKK's armed wing (HPG). In order of importance, the list names Nurettin Halas El-Muhammed, who goes by the code name 'Sofi Nurettin' as the HPG's top in command, followed by Fehman Hüseyin, who goes by the code name 'Bahoz'. The report also lists a number of Syrian women as team commanders.

The two al-Mukhabarat members killed in the operation in Cudi, went by the codenames 'Refik' and 'Sadık'. 'Refik' supposedly joined the organization many years ago and was the Cudi Mountain regional leader. The terrorist who was known by the code name 'Sadık' was stated to be the head of the organization's regional chief in Botan. Both terrorists, who joined the terrorist organization on behalf of al-Mukhabarat, took direct orders from the PKK's Special Forces Commander Bahoz.

According to the information revealed in PKK archives, all of the HPG's administrators are Syrian nationals. The police report on the organization has deciphered all of these terrorists' true identities, their activities in Turkey and details on attacks they have ordered and also contains photographs of every administrative member. According to the report, there are currently 222 active Syrian PKK members. However, it is also known that there are over 1,000 Syrian-native PKK members who have not yet been included in the archives. There were a startling number of women members listed in the report. Slated to be the most effective PKK wing, the HPG's Syrian terrorists have ordered a series of attacks and have also provided PKK members with bombing and military training.

The HPG's top echelon goes by the name Sofi Nurettin. According to the report, Nurettin joined the organization in 1990 and up until 2000 was involved in armed activities in Hakkâri, Yüksekova and Şemdinli. During the years 2003-2007, he was supposedly in charge of state coordination in Diyarbakır's rural region and was directly involved with organizing and ordering a series of attacks in the region. In 2008, he took the place of Dr. Bahoz as commander of the main headquarters. The report also states that Sofi Nurettin speaks seven languages and is in regular contact with Syria's secret service. According to the report, Bahoz Erdal served for many years as Commander of HPG's Main Headquarters. Bahoz is stated to have joined the organization while he was still in medical school. In 1992, he was supposedly based in Şırnak and was running the Cudi region command. In 2003, he was brought on as the HPG's Main Headquarters Commander. Up until 2009, he was involved at the highest level in all of the organization's militant activities. He was also one of the highest level members responsible for ordering the gendarmerie post attacks in 2007 in Dağlıca and in 2008 in Aktütün.