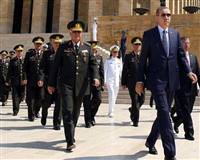 According to an article from AA, during the conference, which was a first of its kind and closed to the press, Erdoğan stated, "When we look back at the times in recent history when there were interruptions in democracy, we see that not a single country profited. During every break in democracy, the economy took significant hits, democracy itself was rocked and the legal system became debatable, costing the nation a decade."

Pointing out that the Turkish Republic is defined by the Constitution as being a 'Democratic, secular and social state of law,' Erdoğan stated, "A Turkey that veers from democracy, the law, secularism and its social state principle will never be on the rise."

Prime Minister Erdoğan also noted that the Turkish Armed Forces' courageousness and capabilities against terrorism is worthy of commendation, and said, "We will continue to offer the strongest form of support, encouragement and to completely provide for all of the needs of the Turkish Armed Forces."
Emphasizing that the terrorism issue will not be solved purely through security measures, Prime Minister Erdoğan also stated, "Simultaneous to security measures, we will continue to take strides towards progress and democratization and we will dry up the bog that breeds terrorism."

Erdoğan also stated that Turkey will determinedly continue all preparations necessary in order to become a full member of the European Union and said, "For us to look towards Europe, does not in any way mean that our backs are turned towards the East, the South or the West."