'It’s time Assad understand he has lost all legitimacy' 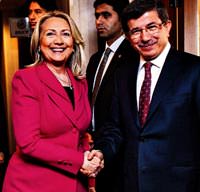 Speaking at a press conference following the Friends of Syria Group meeting held in Istanbul, U.S. Secretary of State Hillary Clinton stated that the final declaration provided a clear and unified message that Assad should finally understand.

Clinton stated that it is time Assad understand that he has lost legitimacy, and those acting with him will never be able to stand up against the opposition efforts, which are down in the name of freedom.


Assad will ether stage a civil war against his own country, which would be a terrifying prospective for everyone, and would not be limited to Syria as it would threaten the entire region, states Clinton, "or he will make a different decision."

Even though the U.S. administration refuses to consider military intervention in Syria, Clinton underlined, that nobody in the world was going to just "sit and wait any longer".

Clinton extended her gratitude to Turkey for its support during this crisis period and expressed how pleased she was to hear that Turkey would soon be making a significant decrease in crude oil purchases from Iran.