Results from the Friends of Syria Group 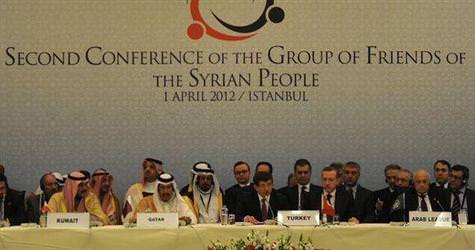 Yesterday’s conference came to an end with a series of significant developments such as the Syrian National Council being fully recognized as Syria’s legitimate representative and the release of a communiqué established through Turkey’s initiative, which supports, “the Syrian public taking legitimate measures to protect themselves.”

The second Friends of Syria Group meeting was held in Istanbul yesterday with the participation of representatives from 83 different countries and organizations.

The summit hosted 41 Foreign Affairs Ministers as well as representatives from international organizations including the UN, the Arab League, the EU, the Organization of Islamic Cooperation, the Gulf Cooperation Council and the African Union. Two major developments during the meeting was the official recognition of the Syrian National Council as Syria's representatives and the lighting of a green light on the use of weapons by the opposition. In addition, for the first time ever, the Friends of Syria Group sent out signals that arms support may be given to the Syrian opposition. A twelfth item was added to the meeting's final declaration as a result of both Turkey's initiative and Prime Minister Erdoğan's statement, that should Syria not follow the Annan plan and the UN Security not fulfill their international obligation to put an end to the bloodshed, "then they will be left with no choice but to support the Syrian people's right to self-defense." The additional article states, "The Friends of Syria Group expresses support for the implementation of legitimate measures for the Syrian public to be able to protect themselves."

The following are a selection of topics included in the 27-item communiqué released by the Friends of Syria Group:

The Syrian regime must put an immediate halt to all incidents of violence. They must stop staging attacks targeted at the Syrian public and must fulfill their responsibility to abide by international law.

The Syrian regime will be judged according to their actions and not the promises made.
The opportunity provided by the Annan plan is not open-ended should Syria continue to refrain from fulfilling their obligations. Should the massacres continue then Annan and if necessary the UN Security Council will be asked to establish a timeline to determine the steps to come.

Support was given to the National Oath document accepted by the Syrian National Council.

The Friends of Syria Group recognized the legitimacy of the Syrian National Council as the official representatives of the Syrian public and also as the umbrella organization under which the Syrian opposition groups will gather.

The Friends of Syria Group will call on the international community to refrain from arming the Syrian regime.

The communiqué also included the decision to establish a center which consults with civil society organizations to record human rights violations.

The decision was also made to form a group in order to ensure the implementation of sanctions, while another work group was formed to deal with economic structuring and development following the Assad regime.

During the conference there were a variety of opinions expressed regarding how much time Assad should be allotted in order to fulfill the Annan plan. Turkey requested that a time line be established in regards to Assad's forthcoming actions. However, certain Arab and EU nations had objections to this request. France's Foreign Affairs Minister Alain Juppe underlined the notion that there was no deadline and states, "Our primary objective is to support Annan's plan in order to put an end to the violence in Syria."German Foreign Affairs Minister Guido Westerwelle noted that giving Syria a deadline could harm the process, rather than expedite it. While the draft text prepared by Turkey included the statement that Syria need implement the Annan plan within 'one week's time', the final declaration released following the Friends of Syria Group meeting, emphasized instead that the opportunity offered to Assad was not 'open-ended'.