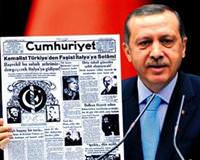 Erdoğan, "I am now going to show you a worthy document of the history of CHP which the opposition feel such pride for."

From the pulpit, the prime minister displayed a decree in which the names and signatures of İsmet İnönü and other cabinet ministers had been signed for the attendance of a ceremony to be held for Hitler on April 11th, 1939.

Erdoğan also pointed out two copies of Cumhuriyet newspaper headlines from 1932 and 1941 which stated, "Sincere congratulations between our National Chief and Führer" and "Kemalist Turkey offers a greeting to Fascist Italy", respectively.

Erdoğan "How can this be? There you go; CHP is a party that likes fascism. If the CHP Chairman is seeking out a fellow Hitler he should look to the history of CHP he is so proud of, he will find it there."