Arınç: Today no one in Turkey can speak of coups 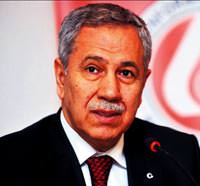 Responding to a question regarding the ongoing trial for the 1980 coup, Deputy Prime Minister Bülent Arınç stated, “No one in Turkey today can dare speak about juntas or coups, because our democracy has become stronger.”

Arınç answered questions from the press after attending the International Women and Media Symposium.

"Today, those responsible for staging the coup are being tried due to Constitutional reforms that were approved with a 58 percent vote. CHP and MHP voted against the September 12th referendum, while BDP called for a boycott. Those who should be celebrating and be praised are the ones who voted 'yes'.
No one in Turkey today can dare speak about juntas or coups, because our democracy has become stronger. Civil-military relations have been put in their appropriate places, as in modern democracies. Today in Turkey only democracy and liberties are discussed. From here on out everyone needs to await the ruling that will come from the judiciary.

(In regards to Constitutional Court Chairman Kılıç's words, 'we will not allow for politics to encapsulate the judiciary') Do not accept Mr. Haşim Kılıç's words as being directed towards the government. Yes, the judiciary will not intervene in politics and politics will not encapsulate the judiciary. This is simply repeating an already known fact. If this was a statement made that excessively pleases the opposition then that makes me happy. That means that certain statements made by Mr. Haşim Kılıç have reached a stage of being applauded."