Conduct from Iran results in discomfort for Turkey 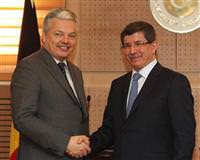 In reference to the upcoming nuclear negotiations with Iran, Foreign Affairs Minister Davutoğlu expressed that Turkey has never been after prestige when it comes to these issues.

Minister of Foreign Affairs Ahmet Davutoğlu held a joint press conference with visiting Belgium Deputy Prime Minister and Foreign Affairs Minister Didier Reynders. Responding to a question regarding where Iran's nuclear negotiations would be held, Davutoğlu stated, "If they want to hold it here, they are welcome to and as always we will try to contribute as much as possible. If they decide to hold negotiations somewhere else, then we will also contribute in any way we can. When it comes to these issues, Turkey has never been concerned with gaining prestige. Both parties however, have expressed to us that they would favor negotiations being held in Turkey."

Davutoğlu went on to state the following: "It is essential to establish two parameters in order to ensure a permanent solution is reached. These two parameters are the basis from which all forms of negotiations can transpire. It is also important for Turkey that no obstacles are placed in front of nuclear technology for peaceful purposes. Secondly, is ensuring that any form of nuclear efforts for military purposes is inspected and prevented. Both sides state that they accept these parameters. With political volition, these two parameters could quickly reap results. In this case, both our region and the world would be saved from a great crisis and would be able to move past this."

When one press member brought up the statements made by Iranian Majlis Speaker Ali Larijani criticizing Turkey, Davutoğlu explained that a comprehensive note has been relayed to him on the matter and they are evaluating the statements made. Davutoğlu stated that the comments were not at all in line with the respect shown to Prime Minister Erdoğan and his committee during his recent trip to Iran.

Davutoğlu explained that he spoke with Iran's Foreign Affairs Minister Ali Akbar Salehi in person and that Larijani expressed that the comments should not be considered official. Davutoğlu also explained that he has called in Iran's Ankara Ambassador and has requested an explanation.

"Turkey does not develop foreign policy based on anyone's demands"

"When Turkey voted no in the U.N. Security Council to sanctions on Iran in 2010, we acted based on our independent will and conscience. We will act with that same independent will and conscience when it comes to Syria," states Davutoğlu, who went on to say, "Turkey does not develop foreign policy based on anyone's demands. Whether or not demands come from the east or from the west, what matters to us are the principles and values we have established for ourselves.

The entire world and most importantly our brotherly Iranian public and all of our fraternal societies in the Middle East is well aware of the clear stance the Turkish Republic has taken against Israeli in recent years due to the Mavi Marmara raid. Forming relations with Israel is definitely unacceptable. However, everyone should be aware that if we took a strict stance against Israel using heavy weaponry to kill women and children in Gaza, then we will exert that same stance when it comes to our Syrian brothers being killed in cities with heavy tanks and rockets, whether it be sectarian, religious or ethnically based. Our foreign policy is not based on strategic advantages but on the value we place on human life."