Coup leader Kenan Evren may be tried like Pinochet 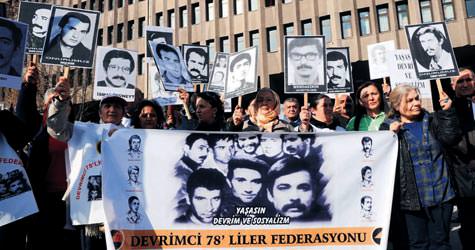 During yesterday’s commencement of the trial on the architects of the 1980 coup, co-plaintiff attorneys stated, “If Pinochet was tried in a wheel chair and Mubarak brought into court in a cage, then the same should be done to bring Kenan Evren and Tahsin Şahinkaya to court.” Evren’s appeal to not face trial was refused by Ankara’s Special Authority 12th High Criminal Court, by stating, “It is our duty to try the crime of staging a coup.”

During the fist hearing for the trial of Kenan Evren and Tahsin Şahinkaya, plaintiff attorneys stated "If Pinochet was tried in a wheel chair and Husnu Mubarak was brought into court in a cage, then even if Evren is on his sickbed, he should still be brought to court. Evren is no less of a dictator then they were."

The trial, which was scheduled to begin at 9:30 yesterday morning, was pushed back half an hour due to the overcrowding in the 147-person hall. Sixty attorneys representing co-plaintiffs and three attorneys for suspects Kenan Evren and Tahsin Şahinkaya were present in court yesterday, while the suspect's themselves were absent.

During the hearing, Kenan Evren's attorney Bülent Acar stated, "Even though the constitution may be defined as a Coup Constitution, it is still currently enforced and therefore all state establishments, including the courts, must abide by it." Claiming that according to the Constitution's temporary articles 1, 3 and 4, the trial and investigation is not valid, Acar requested that the case be dropped. At this point, tension arose between Evren's attorney Acar and the plaintiff attorneys. Chief Judge Süleyman İnce announced the court ruling regarding the appeal by stating, "When assessing the quality of the crimes committed by the suspects as well as our court's areas of authority, this crime falls into this court's authority and duty of jurisdiction, therefore we have voted unanimously against dropping this case."

Plaintiff attorneys requested that Evren and Şahinkaya be detained. Plaintiff Attorney Meral Beştaş brought up the fact that there are a significant number of detainees and convicts that have passed away in prison due to illness, and stated, "If the decision was made to detain these individuals then Evren and Şahinkaya should also be arrested." The trial continued today.

The court has sent medical reports for both Evren and Şahinkaya to Ankara's Forensic Medicine Department in order to determine whether the suspects are fit to face trial in court. Although Ankara's ruling arrived to court in a sealed envelope, Chief Judge Süleyman İnce stated that Ankara's Forensic Medicine Department was not qualified to make a ruling on this issue and therefore he has requested the document be sent to Istanbul for a final ruling. Meanwhile, plaintiff attorneys are requesting reports from the Turkish Medical Association as well as independent doctors.

Victims share with SABAH their memories of the 1980 coup era:

* SAKİNE ARAT: I lost four of my children in Diyarbakır prisons. My daughter was unable to handle what happened and committed suicide. I was sentenced to one year of house arrest and forbidden to attend demonstrations as penalization for constantly talking about the situation. I lost five of my children. How could I not talk about it?

* MÜRVET ESENDAĞ: My child never threw stones at soldiers or the police, yet he was given the death sentence. Without witnesses or proof, they stuck him in a cell. They wouldn't let us speak with him. In the end he was hung. Those responsible for this will have to face up to God.

* GÜLŞAT TAĞAÇ: My son Oğlum Enver Tağaç spent eight years in prison in which he was subjected to countless instances of torture. After he was released from prison, he was killed in the middle of the street by 32 bullets. I died on that same day. Those responsible for doing this to my son were never found. Those who committed torture will now pay the price, they have to.

* NACİ SÖNMEZ (THE SON OF FORMER FATSA MAYOR FİKRİ SÖNMEZ): I lost my father in 1981. I applied to be a plaintiff at the time, however my request was refused. I am here now to hold them accountable.

* SALİM BAĞ: My brother Bekir Bağ was put in prison because he was of the nationalist persuasion. As he was praying in the Mamak penitentiary he was killed from behind with the butt of a rifle. They said that he hung himself. He was just 18 years old… We have been burning for years, now it is their turn to burn.

* FUAT ALKAN: We were just young kids writing on a wall. We ended up serving ten years in jail for it. We were tortured every day. My wounds are still fresh. I have nationalist brothers that are still in prison. We are here to hold them accountable.

* KAMBER ATEŞ: When my mother came to see me in Mamak Penitentiary, because she didn't speak Turkish and Kurdish was forbidden, all she could say was "How are you?" When it comes to the torture, where do I begin… Everyone responsible should be held accountable, not just the two of them.