'This case will be a noteworthy moment in our political history’ 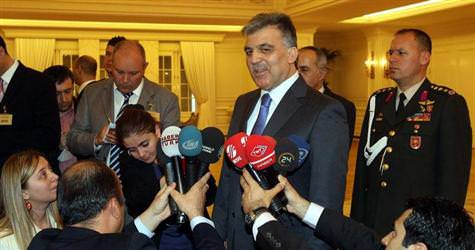 Pointing out that all parties applied to become co-plaintiffs in the trial on the architects of the 1980 coup, President Gül suggests Turkey’s political parties should display the same unity on the new constitution.

President Abdullah Gül was speaking to members of the press prior to hosting South Africa's Ankara Ambassador Vika Mazwi Khumalo. When asked by press members to comment on the September 12th trial which commenced yesterday, Gül responded by stating the following:

"We are currently going through a period of time in which we can learn lessons from, a period of time that will be noteworthy in our political history. Of course, this is also extremely significant for the future. This case will lead to a very important change in mentality which will ensure that these sorts of attempts will no longer be made in Turkey's future.

As far as I can see, our nation, including all of our political parties, has come together in unity over the trial. I would like to remind here, that the constitution, which is our most superior form of law, is the product of the 1980 era. Therefore, I expect all of our political parties to display the same solidarity in the drafting of a new constitution. The current constitution, which is a product of a highly-criticized era, is what directs our lives at present. This must be taken into consideration."