Turkey’s emergency call to the UN 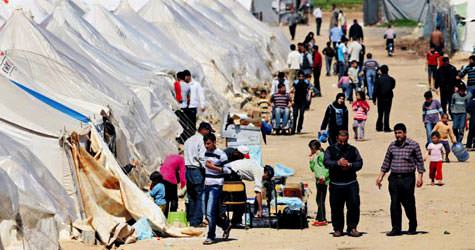 After the record influx of refugees coupled by the sounds of shots fired by the Syrian Army, Foreign Affairs Minister Ahmet Davutoğlu made an emergency telephone call to Ban Ki-moon.

The surfacing of Syrian forces along the Turkish border brought the Foreign Affairs Ministry on alarm yesterday. Although Bashar Assad claims to be withdrawing his troops from the cities, he still continues to stage operations along the Syrian border. A record number of refugees came into Turkey the day prior forcing Foreign Affairs Minister to make an emergency call to U.N. Secretary General Ban Ki-moon. Ban immediately exited a meeting to answer Davutoğlu's call, which came in at two a.m. in the morning. During the conversation, Davutoğlu stated, "Come to our border and see for yourself what is transpiring. It is now time you intervene." Following the conversation, Ban ordered U.N. observers to head for the Turkish border.

Speaking to the press yesterday at Ankara's Esenboğa Airport, Davutoğlu announced that the number of refugees from Syria has now reached 23,825 in Turkey. The Foreign Affairs Minister went on to explain his recent demands made to the United Nations by stating the following:
"The operations need to be halted immediately and troops must be withdrawn from the cities. Everyone is now well aware that there is an international incident transpiring. However, it is important that those who have granted Syria time realize what is happening there. The UN must also intervene when it comes to humanitarian aid and refugees."
Davutoğlu has been continuously receiving information from the Hatay governor regarding the influx of refugees, which he then briefs Prime Minister Erdogan on. Meanwhile, Turkey's UN Permanent Representative Ertuğrul Apakan has held discussion with UN's Political Affairs Assistant Secretary General Lynn Pascoe.

While a number of nations, including the United States, have committed to providing humanitarian aid, Turkey had not yet announced just how much aid would be necessary. However, when the number of refugees surpassed the 23,000 figure a request was made for immediate measures to be taken. Director of External Relations for the UN High Commission for Refugees Metin Çorabatır states, "If the current trend continues for the next six months, and if the number of Syrian refugees in Turkey, Lebanon and Jordan reaches 100,000 then we have determined a figure of 84 million dollars to compensate for all sorts of needs, including accommodation, food and education."