A flood of love in Urumqi 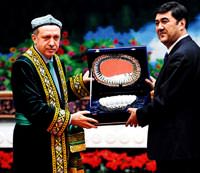 Prime Minister Erdoğan was showered with love in from Uygur Turks who were seeing a Prime Minister from the Republic of Turkey in Urumqi for the first time ever. Erdoğan delivered three significant messages in Xingjian and stated, “I entrust my kin to you.”

Prime Minister Tayyip Erdoğan kicked off his historical trip to China by first paying a visit to the Urumqi, the capital of the Xinjiang Uygur Autonomous Region. Erdoğan was showered with love during the trip, which marked the first time Uyghur Turks have seen a Prime Minister from the Turkish Republic in Urumqi. During his stay in Xinjiang, Prime Minister Erdoğan visited a renewable energy systems manufacturing center and also received a promise of plans to invest in Turkey. Erdoğan's visit to Beijing begins today, where he will be greeted by People's Republic of China Prime Minister Wen Jiabao with an official ceremony. The high level of security measures taken in Urumqi during Erdoğan's visit was especially noteworthy, while traffic was halted and pedestrians blocked from entering the road Erdoğan's convoy, which consisted of approximately 40 cars, was travelling down. Police officers were present every 50 meters throughout the prime minister's route.

Yesterday, Erdoğan first paid a visit to energy firms operating out of the Xinjiang Autonomous Region, including the TBEA wind and solar energy systems firm, where Erdoğan was briefed by authorities. Later, Erdoğan visited Goldwind, a firm which produces giant wind turbines spanning 100-meters in length and 113-meters in width, weighing 110 tons, where the prime minister invited firm authorities to invest in Turkey. Commenting on his visit, Erdoğan stated, "Hopefully we have received their promise to invest, I hope that this sort of investment takes place." While he was touring the factory, Erdoğan was shown a model wind turbine, upon which he joked, will you be giving me one of these? I have three grandchildren at home." In the end, Erdoğan and those in his committee were given gifts of model turbines, which they displayed while being photographed by the press upon their exit. When asked by journalists if there was a specific area determined for wind turbines, Erdoğan responded by stating, "There are a lot of places." Minister of Energy and Natural Resources Taner Yıldız stated, "Our mapping for wind energy is ready."

Energy and Natural Resources Minister Taner Yıldız revealed to the press that they will be making a decision on the tender for the Turkey's second nuclear power plant within two months' time. Yıldız explained that South Korea, Japan, Russia and China are frontrunners when it comes to the issue of Turkey's second nuclear power plant, and stated, "The decision will be made as to whether China will or will not build the second power plant, during this trip." Yıldız also announced that he will be meeting with China's Minister of Energy to discuss the issue.

Erdoğan later attended a prayer ceremony at the Grand Mosque and was greeted by a wave of love from hundreds of Uygur Turks as he walked through the historical Grand Bazaar.

NUCLEAR SUMMIT WITH IRAN
Upon leaving the Grand Bazaar, Erdoğan answered a question on nuclear negotiations being held in Istanbul. Erdoğan responded by stating, "It would not be right for us to comment on something that has not been confirmed. As soon as it is confirmed however, we will of course immediately share this information with you; however it has not yet been confirmed."

Meanwhile Emine Erdoğan, who was walking through the market with her daughter Sümeyye and the wives of the accompanying ministers, suggested to journalists that they consumer organic products.

During a meal held by Bekri in Erdoğan's honor, the Prime Minister delivered a series of messages in three different categories. The first being the message, "We have reached a level of strategic cooperation, however we are not doing it justice. We must increase economic and political collaboration." Erdoğan's second message was in the form of a request that the Silk Road trains be revived. Lastly, Erdoğan expressed how pleased he was that the Uygur public's rights had been rectified and stated, "I entrust my kin to you."

The home of Mahmud al-Kashgari

While speaking with Minister Bekri, the decision was reached to educate certain religious scholars from Uygur in Turkey. Turkey has also decided to take on the restoration of the Xinjiang home of Mahmud al-Kashgari.

Today marks the beginning of the critical portion of Erdoğan's China trip as he heads to Beijing. Erdoğan will be meeting with the Prime Minister of the People's Republic of China Wen Jiabao and will be signing two nuclear agreements. The two nations will also be signing a memorandum of understanding in regards to nuclear collaboration and the peaceful use of nuclear energy.

Erdoğan will also be relaying Turkey's views on Syria and will request that China reconsider the UN Security Council's stance.