PM Erdoğan: This is my last warning to Syria 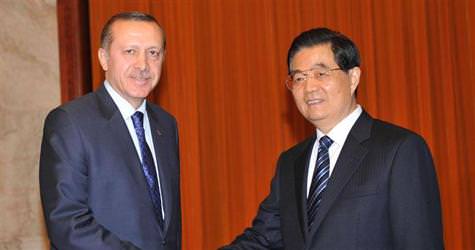 Qualifying the recent fire by Assad’s troops on Syrian refugees trying to cross into Turkey as a "Clear violation of the border", Prime Minister Erdoğan responded to the question of whether a buffer zone will be established by stating, “We don’t want to consider it and Syria should not force us to.”

Prime Minister Tayyip Erdoğan spoke on the recent firing at refugees along the Syrian border, by stating, "There was a very clear violation of the border. We are going to be conducting our final assessment of this border violation."

Erdoğan went on to state, "Whatever measures are taken by other nations when it comes to international policy and law, will in the end be taken by Turkey as well." In response to the question of whether that means establishing a buffer zone," Erdoğan stated, "We need to head towards whatever is the best and most appropriate option. However it is the Syrian regime which is pushing us towards this. In order for them not to force us into this, they need to be the ones to take the necessary step."

Speaking from China, Erdoğan went on to state the following:

OPEN VIOLATION OF THE BORDER

There has now been a very open and clear violation of the border here (in Kilis), this is evident. We are going to be conducting our final assessment of this border violation. Our diplomacy continues intensely with regional countries, whether by me personally or by our foreign affairs minister. Of course, we will take the steps necessary.

What should Turkey do in the case of a violation of its border? Whatever measures taken by other nations when it comes to international policy and law, will in the end also be taken by Turkey. This is a right granted to us by international law.

(Is this the announcement of a buffer zone?) One way or the other, I can't say anything definite. We said, let's lay the issue on the table. We may take a step that varies from what is the best and the most appropriate option. What I mean when I say a step that varies is that we don't want to consider it, we don't want to go there. However, if we are forced to it will be because the Syrian regime forced us. In order to not be forced into this situation, a step needs to be taken by them.

Up until now, we have accepted approximately 25,000 people as refugees. How high will this figure go, will it be 100,000 or more? These people are escaping death. You cannot close your doors to them. When you close the doors you are inhumanely pushing them into a corner. We are accepting them; however they are shooting these people from behind as they try to escape. There is not consideration as to whether they are women or children, they are being ruthless.

You see the present conditions. Twenty-five thousand people have sought refuge in my country, the cost of which has reached 150 million dollars. They consider Turkey to be their saviors.

Some qualify these people as terrorists. When you go and see these people, you see that they are truly and purely the Syrian public.

(On humanitarian aid to Syria) I think that the U.N. Security Council needs to impart a new package. The necessary deliberations will be made on the matter. We will be requesting U.N. intervention, because in this situation this is actually their primary responsibility.

I don't think Syria will find the same support they did prior in the U.N. Security Council. It is very obvious that there is a significant persecution here.

(If international pressure fails to reap results, will conflict arise?) Why are you playing devil's advocate? We have seen the outcome of the U.N. making this decision in the past. If we were to evaluate the situation from this perspective it would be more on point.

(Has the Annan plan come to an end before it even had a chance to start?) From the very start, we hoped that Kofi Annan's style of approach and six-point plan would succeed, however we are seeing that it did not. Even though we explained this to Annan he was still extremely hopeful and it is now evident that it did not stick.

I can't put any odds on anything happening in this upcoming period. If he withdraws from one place, then his tanks go somewhere else, it is this kind of mentality and understanding at play.


(Are you concerned that Turkey is being dragged into something?) Should we evaluate this as Turkey being dragged into something, or should we consider this as being Turkey fulfilling their duty to humanity due to what transpired on our border. Sometimes things happen that are not in the plans, however you are still left with the results. I want to perceive the situation with Syria as such.

Prime Minister Tayyip Erdoğan will be moving on to Saudi Arabia on Friday in order to discuss the Syria issue. He has also announced that later he will be paying a visit to Hatay, a trip which he was forced to postpone earlier. Erdoğan explains that he is pleased to have the opportunity to hear of developments firsthand from the refugees in Hatay, as well as to listen to their needs and demands in a trip that was unfortunately previously postponed.

An announcement released by the Prime Ministry stated that Erdoğan is scheduled to be in Saudi Arabia on April 12th to the 13th. Meanwhile, Minister of Foreign Affairs Ahmet Davutoğlu will be headed to the United States in order to attend the G-8 summit.

Relaying an invitation from Gül

While in China, Prime Minister Recep Tayyip Erdoğan met with People's Republic of China Paramount Leader Hu Jintao. Jintao greeted Erdoğan warmly and expressed how pleased he was due to his visit. Jintao also stated that he believes this trip will be extremely beneficial for strategic collaboration between both nations. Meanwhile, Erdoğan relayed the message, "I would like to express that Mr. President Abdullah Gül would like to invite you in June. We would like to see you in our country."