‘I am extremely pleased with our head of secret service’ 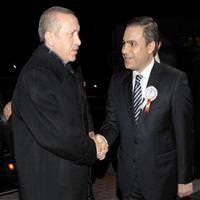 Erdoğan emphasized that he appointed MİT Undersecretary Hakan Fidan to deal with the Kurdish issue and stated, “It was me who sent him to Imrali and Oslo.”

Prime Minister Recep Tayyip Erdoğan was responding to questions from the press upon his return from China, when the subject matter turned from Syria to Turkey's internal affairs.

When one journalist referenced the request made by the judiciary to question the National Intelligence Organization (MİT) Undersecretary and other high level officials and asked if it was true that the Prime Minister requested an internal investigation prior to granting his response, Erdoğan took a deep breath and stated, "Comrades, for the first time ever, I am going to speak openly on this issue. It was impossible to remain silent to the judiciary's request. Meanwhile, it was just when I was in recovery. Our MİT Undersecretary is my closest colleague. Hakan Fidan was extremely successful in his previous positions (as Prime Ministry Deputy Undersecretary and as the Director of TİKA). He is also very successful in this position. He is performing a duty that involves perpetuating the Turkish Republic. As you know, internationally they are referred to as agents. In every country, they stage confidential operations authorized by the heads of state, all in order to secure the nation and its future.

This is how it is everywhere. Therefore, I am the one who sends the MİT Undersecretary to Imrali and I'm the one that sends him to Oslo. Why am I doing so? Because we are fighting against terrorism and we have to be successful in that fight. In order to do so, we need to use all of the tools that we have.

Let me clarify one point: claims that the MİT Undersecretary made certain statements during the Oslo deliberations is a fallacy, because there were no written records of the deliberations. There was a verbal exchange during those meetings and that's it. I am very pleased with the efforts put forth by our MİT Undersecretary. He has contributed significantly to our country. He is a very well-bred bureaucrat. He holds all of my confidential information as well as that of the Turkish Republic.

Whether he is in Oslo or in Imrali, his work deserves respect. In regards to that issue, the judiciary attempted to use an authority they were not granted. The judiciary should definitely not consider themselves to be above the law."