‘Turkey may call on NATO to official duty’ 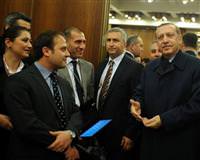 Speaking to journalists during the close of his trip to China, Prime Minister Erdoğan’s focus was on the situation in Syria as he shared that the option of NATO intervention is now on the table following the recent border violation.

The following are a series of statements made by the Prime Minister regarding the recent agenda with Syria:

I told China's State Leader Hu Jintao: "The deathtoll in Syria has reached 10,000. The cities have turned into ruins. The situation is heart-breaking, people are being viciously murdered in front of their mothers. This is an era of inhumanity. China's sentiments correspond with Turkey's. They explained to us that up until now, China has used their right to veto eight times, the last two of which were in connection to Syria. They now have no more options. I said to to them, 'We have received information that you will not be vetoing rulings on Syria from here on out.' Hu Jintao did not respond with a 'no'. Once we return to Turkey we will be focusing on Russia's stance.

On Friday, we will be headed on a day trip to Saudi Arabia. Later, I will be paying a visit to the camps in Hatay. I want to see it for myself.

Is there any point of change in the Russia, China and Iran threesome's position on Syria? China's position is beginning to overlap, while Iran also states that they are also at that point. When we went to Tehran, they were referring to those who resisted the Assad regime as being terrorists. We said, 'Please do not speak like Bashar Assad. You cannot approve of this; they perceive their public as terrorists. We explained that we are dealing with a public that is struggling for their lives. In the end, they suggested working together.

Bashar Assad is after a different game; this is battle between Arab nationalists and Islamists. By using this tactic, Assad is attempting to agitate the Arab League against Iran. We explained this to Iran and they didn't say anything.

The violation of our border is a signal flare in terms of infringing on international law. Of course, the Republic of Turkey has its own stance. Whatever other countries do in accordance to international law is what we should do at the very least.

Syria's administration needs to come to their senses and be aware of the following:
1-We will never close the borders and we will continue to accept refugees.
2-If they continue to attempt to shoot at the border; then I just don't know where this situation will go and what will happen in the future…

Yes, the Security Council needs to deal with the issue. If necessary, the 83 nations and international organizations represented at the second Friends of Syria Group held in Istanbul could exert pressure on the Security Council to release a ruling. If the Security Council does not take a step and if Syria is dragged into an even worse situation, then what choices will Turkey have? We have many options. "We have many options. A country has rights born out of international law against border violations." Also, according to Article 5, NATO has responsibilities when it comes to Turkey's borders, (Article 5 of the NATO treaty declares that an armed attack against one of its members will be considered an attack against all members and allows for the use of armed force.) Turkey may call the NATO council to a meeting to discuss implementing article five, that is, if the Security Council does not come up with a ruling and if Syria continues to violate Turkey's borders."