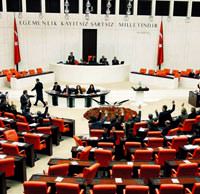 All four political parties in Turkey’s Grand National Assembly have approved a proposal to form an Assembly Research Committee to investigate Turkey’s past coups and military interventions.

The proposal to form an investigative commission to research all of Turkey's previous coups was accepted in parliament yesterday. The proposal, which was approved in an unusual compromise by all four parties with groups in parliament, leads the way to a historical investigation for the Assembly.
According to the research proposal, which was prepared in conjunction with the AK Party, CHP, MHP and BDP in the General Assembly, foresees investigating the coups and military interventions staged on May 27th, March 12th and February 28th as well as the April 27th e-memorandum.

Deputy Prime Minister Beşir Atalay spoke on behalf of the government in thanking the assembly and all of its parties. "Coups and military interventions were like strait jackets being forced onto our country. The nation and all of its establishments have now exclaimed that they will never be forced to wear this straitjacket again," states Atalay. The deputy prime minister went on to emphasize the importance of investigating and analyzing the former coups without sentiments of revenge in order to leave them in the past and pave the way for Turkey's future and stated, "Those responsible for the September 12th coup are now facing trial, 20 years later, due to a constitutional reform."