Syria’s transition period must be completed as soon as possible 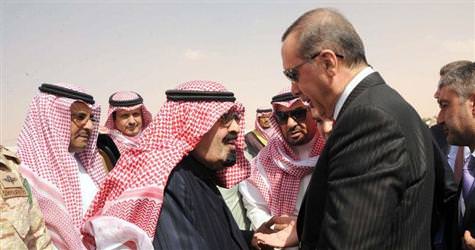 Meeting with King Abdullah in Saudi Arabia to discuss the situation in Syria, both Erdoğan and the King conferred that it was crucial to send a monitoring committee to Syria within the framework of UN Special Envoy Kofi Annan’s plan.

During his trip to Saudi Arabia, Prime Minister Recep Tayyip Erdoğan met with King Abdullah for three hours, one hour of which consisted of a one on one meeting. Erdoğan's emphasis was on facilitating the Syrian public's demands for a transition to democracy as soon as possible. Prime Minister Erdoğan arrived to the military airport in Riyadh yesterday in the early morning hour of three a.m. by private plane (ANA) where he was greeted by Riyadh Emir Prince Salman bin Abdul-Aziz Al Saud and Turkey's Ambassador to Riyadh Ahmet Muhtar Gün after which he spent the evening at the Kingdom's Guest Palace. The next day, after conducting his Friday prayer ceremony at the mosque located inside the guest palace, Erdoğan then flew by helicopter to visit King Abdullah bin Abdul-Aziz Al Saud at his palace located in Riyadh's northeastern district of Rumah.

A GIFT OF A PHOTOGRAPH

The King of Saudi Arabia greeted Prime Minister Tayyip Erdoğan on the helicopter landing pad. The two got into the same car headed for the greeting tent. During his meeting with the King, Erdoğan presented him with a gift of a photograph taken of the two leaders in the Riyadh Palace on February 24th, 2007. After the meeting, Kin Abdullah and Prime Minister Erdoğan moved on to a different tent to partake in a working meal. Both meetings lasted an approximate total of two hours. Later, Erdoğan visited King Abdullah in his desert palace where they met one on one for an hour. King Abdullah and Prime Minister Erdoğan walked hand in hand to the location of their meeting, which transpired in a friendly atmosphere and was focused on the Syria issue.

RETURN TO THE HOMELAND

According to information released by the Prime Ministry, the importance of Syria's territorial integrity and unity was underlined. Meanwhile, Erdoğan's emphasis was on facilitating the Syrian public's demands for a transition to democracy as soon as possible. Both Prime Minister Erdoğan and King Abdullah pointed out the importance of swiftly sending international monitors to Syria and emphasized the significance of not allowing the Annan plan to be used by the Damascus administration as a stalling tactic. According to observations, both Turkey and Saudi Arabia appear to harbor the same stance on the Syria. After the series of meetings in Saudi Arabia, Prime Minister Erdoğan returned home. Today, Erdoğan is scheduled to meet with Iraq's Vice President Tariq al-Hashemi.