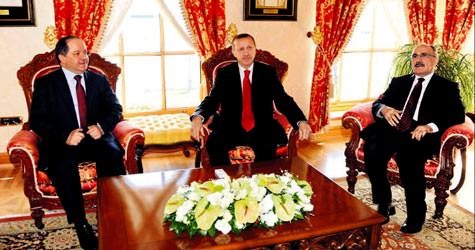 Prime Minister Erdoğan was joined by Deputy Prime Minister Atalay, MİT Undersecretary Fidan and Foreign Affairs Ministry Undersecretary Sinirlioğlu during a meeting yesterday with Masoud Barzani in which the PKK, Syria and Hashemi, who has been in Turkey for a week now, were the main items on the agenda.

Prime Minister Recep Tayyip Erdoğan met with Masoud Barzani, the president of Iraq's semi-autonomous Kurdish region, at his Istanbul Office in Dolmabahçe yesterday.The meeting between Erdoğan and Barzani lasted an hour and 40 minutes, whereas an Aril 5th meeting between the two had gone on for two hours and ten minutes. Barzani arrived to Dolmabahçe in a turquoise Mercedes at 14:35, which was 35 minutes late for their scheduled meeting. The meeting was closed to the press and Deputy Prime Minister Beşir Atalay, MİT Undersecretary Hakan Fidan and Foreign Affairs Ministry Undersecretary Feridun Sinirlioğlu were also present.

Prime Minister Erdoğan had announced prior to the meeting that he expected to discuss Iraq as well as regional issues, focusing on Syria and stated, "It is inevitable that the issue of terrorism in Turkey and the PKK will come up because there are aspects that involve Northern Iraq." During the meeting, Barzani's recent trips to a series of European nations well as the United States was discussed as was the situation with Tareq al-Hashemi, who has been in Turkey for a week now. Iraq Prime Minister Nouri al-Maliki issued a warrant for fugitive Iraqi deputy president Tareq al-Hashemi's arrest in December. Hashemi was seeking shelter in the Iraqi Kurdish region until recently when he departed for Saudi Arabia, followed by Qatar and later arriving in Turkey.

Commenting on Hashemi's arrival while he was in China, Prime Minister Tayyip Erdoğan had stated, "He has health issues and has come to Turkey for treatment." Hashemi met with Erdoğan in Istanbul, President Abdullah Gül and Foreign Affairs Minister Ahmet Davutoğlu in Ankara and made reference to Barzani's arrival to Turkey by announcing that he plans to return with him to Northern Iraq.

After meeting with Prime Minister Erdoğan yesterday, Barzani went on to meet with Tareq al-Hashemi at the Conrad Hotel. After the half an hour meeting, Tareq al-Hashemi made an announcement in which he stated that the two had discussed Barzani's trip to the U.S. and his trip to a series of Gulf nations. Hashemi went on to state, "Barzani expressed that his meeting with Erdoğan was extremely productive and beneficial. Mine went that way as well.'