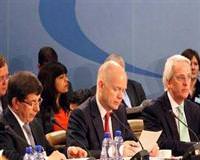 Having yet to receive a formal apology from Israel for the Mavi Marmara attack, Turkey has now struck back at the Tel Aviv administration with a heavy blow in the international arena.

Turkey has vetoed Israel's participation in a key NATO summit to be held on May 20-21 in Chicago. Despite calls from a number of NATO nations including the United States for Turkey to reconsider, Ankara has underlined that they are adamant in upholding the veto against Israel participating in the summit as long as Israel continues to refrain from issuing a formal apology for the attack on the Mavi Marmara aid flotilla which resulted in the deaths of nine Turks as well as to pay compensation to the victims' families.

The issue was brought to the table during a meeting of NATO foreign affairs ministers held in Brussels on April 18-19. Turkey has blocked Israel from a number of NATO-related steps in the past and has perpetuated its stance for the upcoming NATO summit. In addition to the U.S. and France, NATO Secretary-General Anders Fogh Rasmussen also criticized Ankara's move by referring to it as bringing 'bilateral issues to the NATO platform."

According to diplomatic sources, Foreign Affairs Minister Ahmet Davutoğlu responded to a number of nations blaming Turkey for 'violating NATO's values', by stating, "First and foremost, partners need to act like partners. If they act like partners, then we will treat them as partners." In an effort to persuade Turkey to lighten their stance on the NATO summit, a number of nations brought the option of vetoing the participation of other countries involved in the Mediterranean Dialogue program, such as Egypt and Morocco.

According to sources, U.S. President Barack Obama, who will be hosting the NATO Summit, is exerting efforts to persuade Ankara otherwise in order to ensure the issue between Turkey and Israel does not overshadow the critical meeting.
Last Update: Apr 23, 2012 4:46 pm