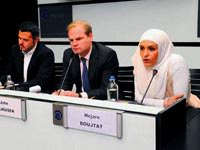 Amnesty International has announced in a recent report that using secularity and gender equality as a justification for prohibiting the wearing of headscarves in schools or places of employment is a violation of human rights.

A report released by Amnesty International entitled 'Choice and Prejudice: Discrimination Against Muslims in Europe provides an overview of how discrimination on the basis of religion or belief affects Muslims in Europe and is based on field research carried out in France, Belgium, Holland, Spain and Switzerland. The report states, "Amnesty International maintains that secularism is not a legitimate aim under human rights law to restrict the rights to freedom of expression and religion or belief," and concludes that Muslims in Europe should retain the right to freely express their religious and cultural beliefs and they should be allowed to choose for themselves whether or not they want to wear certain clothing or perform certain religious practices. The report also criticized Turkey for its prohibition of headscarves.

Speaking at a press conference at the presentation of the report Europe and Central Asia Deputy Program Director for Amnesty International John Dalhuisen said that the wearing of headscarves cannot be prohibited by using secularity, gender equality or corporate image as a justification.