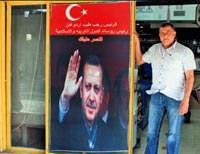 Azzam Maraka, a Palestinian shopkeeper in East Jerusalem refuses to take down posters of Erdogan and Turkish flags hung in his shop, despite being hassled by Israel police.

Azzam Maraka explained that even though last month he was fined 45,000 shekel (approximately 22,000 lira) by the municipality due to the posters and was threatened to be shut down, he is not concerned and will not take them down. Maraka says his admiration for Recep Tayyip Erdoğan began after the Davos meeting and asks that the Prime Minister provide him with a large Turkish flag.
Last Update: Apr 26, 2012 4:29 pm