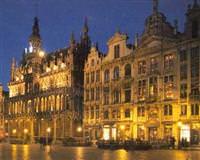 A new proposal prepared by the European Commission on beginning visa dialogue on lifting regulations with Turkey will be handled during the April 26th-27th EU Internal Affairs and Council of Ministers of Justice.

According to AB Haber, the European Commission will be opening up the issue of lifting visa regulations with Turkey for debate when they discuss the Readmission Agreement with Turkey. A high level bureaucrat from the EU Council who spoke with AB Haber explains that at the meeting in Luxembourg, they plan to reach a compromise when it comes to Turkey.

THE PROPOSAL COMPROMISED ON WILL BE SENT TO ANKARA

Should a compromise be reached, it will not be announced to the public and instead will be held on wait for the second round of Presidential elections in France on May 6th.
After the elections, the proposal on Turkey will be presented to Turkish officials in Ankara by a committee formed by the European Commission and EU Term President Denmark.

If Turkey shines a green light on the proposal compromise reached by an EU general consensus, then on June 7th the proposal will be accepted by the EU Internal Affairs and Minister of Justice Council meeting after which visa dialogue will begin with Turkey.

-THE ROAD MAP FOR TURKEY:

According to AB Haber, for the EU Council to begin dialogue on visas with Turkey, after receiving approval from the European Commission, a road map will be established for Turkey. This road map will be as follows:
"The passing of biometric passports,

-To increase cooperation with the EU Border Protection Agency Frontex,

-To develop collaboration with Europol.

-To bring Turkey's visa policy in accordance with the EU's visa policy.
Once Turkey fulfills all of the aforementioned conditions, the European Commission will then bring the issue of liberalizing visas. In other words, the lifting of visas for Turks will only be brought to the agenda once Ankara has fulfilled a number of conditions.

Meanwhile, Germany and France have openly expressed that they are definitely against the lifting of visa regulations for Turkish nationals.