A deepening of friendship between Turkey and Australia 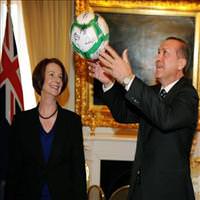 Australian Prime Minister Julia Gillard, who was in Turkey to attend a commemoration of the Australian soldiers who died in Gallipoli, held separate meetings with both President Abdullah Gül and Prime Minister Erdoğan.

During Gillard's meeting with her Turkish counterpart Prime Minister Erdogan, they reached a decision to hold a joint commemoration on the 100th anniversary of the Battle of Çanakkale.The two prime ministers have decided to act together in organizing joint projects for the 100th year commemoration of what is also known as the Gallipoli Campaign to be held in 2015.

A joint declaration released following the meeting, reaffirmed the strong and amicable ties between the two nations following the joint tragedy experienced in World War I. The statement also announced that the two nations aim to gain new momentum in relations through the 100th anniversary of the Çanakkale Campaign. The declaration announced the following decisions reached during the meeting:

PREPARATIONS FOR 2015: In an effort to celebrate mutual cultures, the year 2015 will be announced as 'The Year of Turkey in Australia' and 'The Year of Australia in Turkey'. During this time, a variety of activities will be held in an effort to increase historical, social and cultural understanding and awareness between both countries.

COLLABORATIVE PROJECTS: The joint collaboration on establishing, developing applying and conducting projects in order to commemorate the 100th anniversary of the 1915 Çanakkale Campaign will be promoted. Proposals for the ceremonies to be held for the 100th year commemoration in Turkey will be relayed by diplomatic routes to the related departments in Turkey for their approval.

GOVERNMENT TO COVER EXPENSES: Based on the evaluation of each activity proposed, all expenses for the events selected to be held for the 100th anniversary will be covered by both governments.