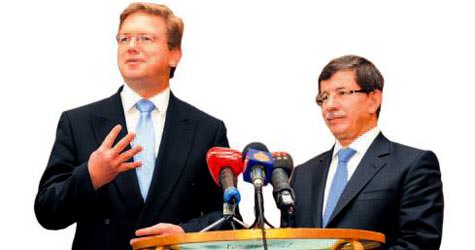 When Turkey responded to the potential bargaining on visa exemption with the EU, by stating, “If deliberations do not start immediately, then we will not sign the Readmission Agreement,” the EU was unable to reach a ruling, resulting in negotiations being postponed for another month.

Despite the recent surfacing of the potential of discussing waiving visas for Turkey, no decision was reached on deliberations in the EU on exempting visa regulations for Turkey. The EU intended for visa waiving negotiations to be initiated following and in exchange of Turkey's signing the Readmission Agreement involving the readmission of illegal immigrants transiting through Turkey to reach EU destinations. Turkey on the other hand, does not want to sign the agreement until negotiations of exempting visa regulations for Turkish national travelling to the EU begins. The result was what Turkey wanted and the EU did not reach a ruling at yesterday's interior ministers meeting.

When it began to be evident that the agreement text was not going to be favored by Turkey, the Permanent Representative in Brussels stated, "We cannot accept this text to sign the Readmission Agreement. If you make a decision now, you cannot change it later. If you like, let's delay reaching a decision and continue to hold deliberations."

Upon the delivery of these messages to the Interior Affairs ministers, no ruling was made. The perspective offered in facilitating obtaining visas for Turkish nationals to EU nations was not found sufficient enough by Ankara to render the signing of the Readmission Agreement. The EU wanted to bring on long term conditions and to ensure there was a gradual transition for the lifting of visas, while also requested that Turkey immediately sign the Readmission Agreement.

Turkey expressed that visa waiving deliberations would last at least two to two and a half years and refused to accept any conditions on the timeframe. The message delivered by Foreign Affairs Minister Ahmet Davutoğlu and EU Minister Egemen Bağış in Brussels with EU High Representative Catherine Ashton and European Enlargement Commissioner Stefan Füle was reiterated in Brussels yesterday.
Minister Davutoğlu relayed this expectation on April 23rd by stating the following: "Our stance is clear; come to us with a decision on waiving visas. Appoint someone to conduct these deliberations. As these negations begin, we will begin initializing the Readmission Agreement. Once the process comes to an end, then we will sign both agreements simultaneously. Initials for approval, a signature for a signature, an action for another action…"

Germany, Austria and Holland are against waiving visa regulations for Turkey. France, whose stance against Turkey is well known, was not present at the Interior Ministers meeting due to the race for the upcoming presidential elections.