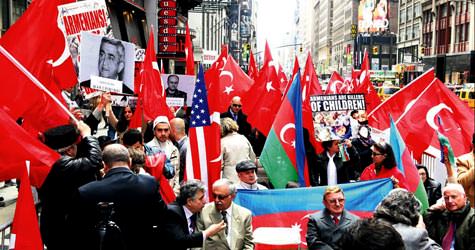 The Turkish community in the United States displayed their solidarity against Armenian allegations, regarding the incidents that transpired in 1915, by staging a demonstration protest in New York’s Times Square.

The demonstration, which was organized by the Young Turks Association, a member of the Turkish American Association Federation (TADF), was attended by a significant number of Turks residing in America as well as American citizens of Turkish heritage who came out to protest Armenian allegations. The demonstration began with the recital of both the American and Turkish national anthems followed by a moment of silence for the Turkish diplomats killed by the ASALA terrorist organization. The protest, organized through the joint efforts of those who share Turkish heritage from the Turkish, Azerbaijani and Turkish Republic of North Cyprus communities in the United States, was staged in New York's internationally famous Times Square, where 42nd Street and Seventh Avenue meet. Demonstrators handed out brochures responding to Armenian allegations to U.S. citizens that passed by.

Delivering an address during the presentation, TADF Chair Ali Çınar stated, "We do not have a history to be ashamed of, instead we have a history we can take pride in. Anyone who wants can take a look at our archives, they are open to everyone." Çınar also pointed out that certain nations' that support Armenian allegations tend to turn a blind eye to the deaths of Turkish diplomats by ASALA.