“There will be no peace in a world without Palestine” 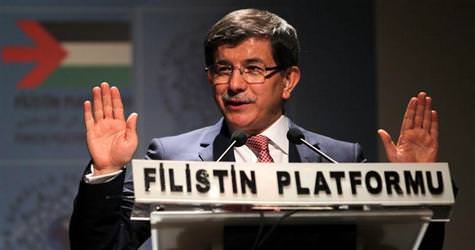 Speaking at a conference held in Üsküdar, entitled “The Palestine Issue from a U.N. Basis”, Foreign Affairs Minister Davutoğlu stated, "When Palestine is mentioned, the human conscience comes to mind. Turkey, we have always been the voice of humanity and we will continue to be so.”

The conference was organized by the Palestine Platform in conjunction with Turkey's Volunteer Organizations Foundation. The Palestine Platform was formed in 2009 in order to provide information on the historical, political and legal issues surrounding the Palestine issue. Held in Istanbul's historical Üsküdar district on Thursday, the conference drew out a wide crowd of attendants which included, Foreign Affairs Minister Prof. Dr. Ahmet Davutoğlu, Üsküdar Municipal Mayor Mustafa Kara and Palestine Platform Chairman Erol Yarar in addition to a number of politicians including Palestinian Ambassador Nabil Maarouf and a series of academics, members of the media and civil society organizations.

Speaking at the conference, Foreign Affairs Minister Prof. Dr. Ahmet Davutoğlu stated "The UN represents the conscience of humanity. There is no reason for the existence of a United Nations organization that does not have a conscience. Throughout the world, the conscience of humanity acknowledges that Palestine must be independent. The solution to the Palestine issue however lies with the U.N. Our Prime Minister became the voice of the conscience of humanity at Davos. When Palestine is mentioned the human conscience comes to mind. Turkey has always been the voice of humanity and consciousness we will continue to be so. We will act as the voice and supporters of Palestine wherever we go. That is until Palestine is able to live in honor and independence…"
Expressing that every environment throughout the world where legal norms prevail believe in Palestine's territorial integrity and independence, Ahmet Davutoğlu stated with the exception of the Israeli's which harbor extreme ideals, the Israeli public in general tends to believe that the occupation will come to an end some day. During his address, Davutoğlu went on to say:

"Why has the occupation in Palestine gone on for so long? Why are there no sanctions issued in order to bring an end to this occupation? As Turkey, we can critique and use strong language against Israel. We have never persecuted them and we have the right to prevent them from oppressing others. In Andalucía during World War II, it was us who opened our doors to the persecuted Jews. However, today's oppressed nation is the Palestinian people." Israel must comply with international law. No nation is above international law. This is the U.N.'s most basic rule. We will continue our struggle in international grounds for as long as Israel refuses to respect international law and persists in considering themselves to be above other nations. It is in these regards that we will continue to stand by our Palestinian brothers."
Davutoğlu went on to state that right now peoples' honor is being played with in the Middle East, and those uprising in Tahrir Square and in Syria are fighting for their honor. "The Palestinian public has the right to determine their own destiny and that time will come. As long as this ideal is not realized, there will be no order in the Middle East. We want a completely independent Palestine with its border integrity intact. East Jerusalem should definitely be Palestine's main city. This is a right belonging to our Palestinian brothers. Jerusalem should be a capital in which three religions are represented and the honor of humanity prevails. This problem will not be solved until the Jerusalem issue is. We want all of the pain suffered by Palestinian refugees to come to an end. Peace will not be established as long as the Palestinian refugees in Lebanon, Syria and Jordan especially, are not granted their own status.

The Palestinian state needs to acquire its own economic strength. Hopefully one day the Palestinian flag will wave at the U.N. as it does at UNESCO. It will be that day when we believe that an international order has been established. We do not believe in roadmaps. If the voice of the conscience of humanity and international law was heeded, then reaching a solution would be a matter of days. However there are some that do not want a solution to be reached, which is the reason the problem still exits. We however will continue our struggle until a solution is reached. Reconciliation between Palestinians is of utmost importance. They need to be rid of the seeds of dissolution between them. The fact that negotiations between Hamas and al-Fatah are reaching a point of compromise, has given us great hope."

Davutoğlu concluded his speech by stating the following:

"As Turkey we have taken on the problems in the region and we will not allow anyone to pull us away from the region's people. Palestine is the cornerstone of this peace order. We will not allow Palestine to become a secondary issue. We will be involved in every issue involving Palestine in international platforms. A solution will be neared when this region is able to exist in mutual respect and tolerance of diverse ethnic groups and religions. Until then, we will continue to display our solidarity, by standing side by side with the Palestinian people."