Erdoğan: Sarkozy should go on a vacation and France should change 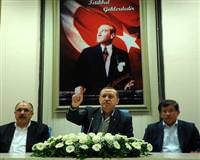 Prime Minister Recep Tayyip Erdoğan commented on the outcome of the recent presidential election in France by stating, “At this point, Mr. Sarkozy will probably keep to the promise he made and will no longer continue his career in politics. He is probably going to take a vacation now.”

Erdoğan was answering journalist's questions at a press conference held at the airport prior to his departure from Gaziantep to the Slovenian capital Ljubljana when he commented on the results of the presidential election in France. Stating that the results were expected, Prime Minister Erdoğan went on to state; "Of course what matters is that the result truly matched the latest public opinion surveys. This is a serious success. There was practically just a one-thousandth to one percent deviation in public opinion polls and of course at this point, Mr. Sarkozy will probably keep to the promise he made and will no longer continue his career in politics. He is probably going to take a vacation now; there is nothing else he can do.

We hope that this new period for France will be very different for Turkey-France relations, and will be one geared with sensitivity towards peace, solidarity, and sharing. Otherwise if the populist messages spread during the election campaign are also implemented by this administration, this would negatively affect the direction of Turkey-France relations. My heartfelt wish is for those statements to remain as ones solely spoken during the election campaign."