PM: Erdoğan: No compromise on constitution sought by opposition 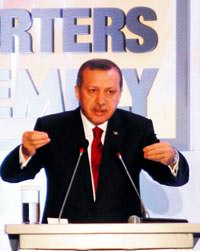 Prime Minister Tayyip Erdoğan expressed that they will not be able to fulfill their goals for 2023 with the current constitution and stated, "We have promised the nation, we will not leave the table."

Erdoğan also responded to a statement made by CHP's Tunceli deputy Kamer Genç who had stated that they were willing to engage in armed combat if the constitution is not drafted to their approval. "If you were planning to come to Ankara and the parliament with a weapon, then why don't you just stay in the mountains," stated the prime minister.

NOT WITH THIS CONSTITUTION: "Turkey still has a serious problem regarding the constitution. We cannot achieve our goals for 2023 with the current constitution. Unfortunately this sort of constitution does not live up to Turkey's vision and goals. We made a number of significant amendments to 26 articles of the constitution in 2010. However we did not do this with parties that have parliamentary representation, we went to the public to make these changes. At present, we are determinedly and excitingly continuing our extremely comprehensive efforts to draft a libertarian, democratic and civilian constitution."

SIGNS OF DRAGGING: "I have said it before, we made a promise to the public, therefore we will not be the ones to leave the table. We will also never allow for anyone to impose upon our public. The chairman of the main opposition party has recently begun to bring up certain conditions regarding the constitution. To be honest, he is actually beginning to give signals of dragging his feet. When it comes to the judiciary issue, there appears to be a slow wind of nostalgia, longing or a desire to return to the September 12th era, or if not then the May 27th era.

NO RETURN TO THE PAST: "There will be no returning to the past. We want to draft the 2023 constitution and not the constitution from 1961 or 1982.We will be doing our best to achieve this."